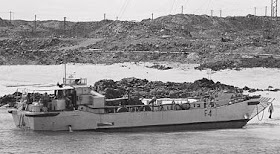 Every year between April and July a conflict is remembered that cost the lives of over 900 people on the other side of the world in 1982. When Argentina laid claim to the Falkland Islands and South Georgia and mounted an invasion it was up to the UK to re-take them back by force. A fleet of 101 ships was sent thousands of miles south in treacherous conditions complete with an entire invasion force. The fleet consisted of two aircraft carriers, several passenger vessels requisitioned as troopships and two amphibious sister ships named Fearless and Intrepid which were equipped with eight of their own landing craft. 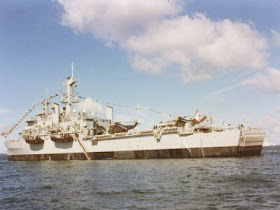 Fearless had been launched in 1962 in Belfast and was a pioneering design of warship whereby the entire stern of the ship would flood until the after end was low enough for a huge door to open and four of these landing craft to simply float out fully loaded from an internal vehicle deck. Four other smaller craft were launched from the ships side from davits.

The four larger craft were known as Landing Craft Utility (LCU) Mk 9 and were numbered Foxtrot 1 to 4. They could carry over 100 personnel at a time or one large vehicle with a mixture of equipment and personnel. 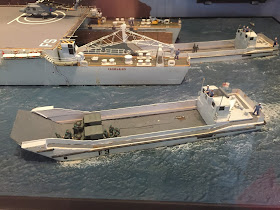 When the fleet reached the Falklands the Argentine navy had already fled following the sinking of their cruiser General Belgrano by a British submarine with heavy loss of life. As the weeks went on the loss of British ships to air attacks was getting staggering with the sinking of the destroyers Sheffield and Coventry, frigates Ardent and Antelope, cargo ship Atlantic Conveyor and a host of damaged vessels caused by bombing raids.

But on 8 June an air attack in an area known as Bluff Cove devastated the two RFA's Sir Galahad and Sir Tristram leading to dozens of deaths and 150 wounded personnel, mostly through burns. On a second wave the F4 was located and took a direct hit from a bomb and was severely damaged.

With eight crew on board, there were only two survivors and the vessel was crippled and sinking . A radio call was sent out for help and this was answered by the supply ship Monsunen which took her in tow in a desperate attempt to save her. 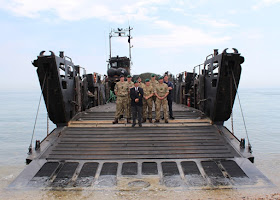 The survivors were taken off and as it became obvious that the craft couldn't be saved the tow was let go. She was left to drift and was seen again the following day by a passing warship before disappearing into history.

Plaques to the six who died that day were put up on board the Fearless as well as on the Falkland Islands which were successfully taken back from the Argentine invaders after a total of three months. 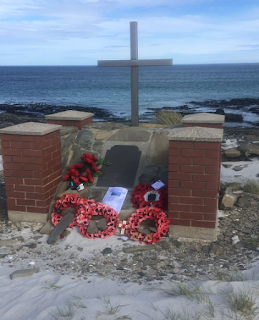 Today the six members of F4 crew who died that day are remembered every year by their families and also the current Royal Marines LCU crews of HMS Albion and Bulwark, the two ships that replaced Fearless and Intrepid.

Those who died on board F4 are -


It is my aim to write a book on Foxtrot 4. If you can help in any way with photographs, stories or experiences involving this vessel then please get in touch shipwreckdata@yahoo.co.uk
Disasters and Shipwrecks at 11:55 AM
Share