Since the publication of my book Collision in the Night about the story of the life and sinking of the destroyer HMS Duchess it has since come to light the story of one of her lost sailors from a relative who saw an online post and contacted me to tell me all about them.

It was the very early hours of 12th December 1939 that the Duchess was part of a task force escorting the battleship HMS Barham home from the Mediterranean that a collision occurred and the smaller destroyer turned turtle before sinking off the Mull of Kintyre in the Irish Sea. Over the years the story has not been looked into until I began my research around 2004 and started gathering information. It took me around 15 years to piece together what little was still available. 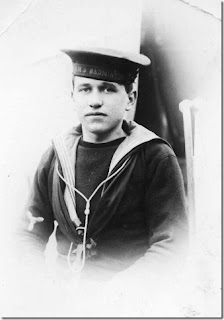 Tim Webb wrote to me to say that his grandfather, Petter Officer George Webb, was a stoker on board the Duchess, using his mothers name instead of his real surname (Vetter). Tims father was only ten years old at the time of the sinking and he died in 2000 after finally knowing that his name was etched into the Chatham war memorial. 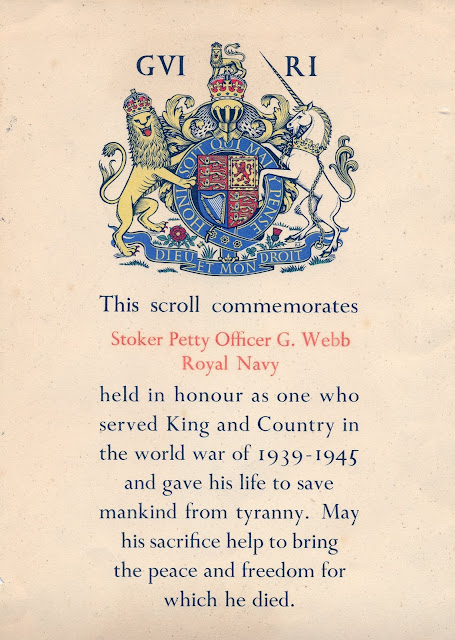 Here is a scroll that adorned their house for many years as a reminder of George. Today the Webb family is very proud of their links and Tim immediately purchased a copy of the book to read about what really happened the night the ship went down.

The book Collision in the Night - The Sinking of HMS Duchess is available on Amazon and Lulu.com priced at £7.


Posted by Disasters and Shipwrecks at 4:41 PM No comments:

In July 2019 I found myself in Helensburgh, Scotland, stood outside the Scottish Submarine Centre, a place that I had never heard of but I was guessing it was a museum related to the Royal Navy submarine service which had a base just six miles from here at Faslane, a base that has just commemorated 50 years of the Continuous At Sea Deterrent where a nuclear submarine is said to be at sea 24 hours a day 365 days a year. 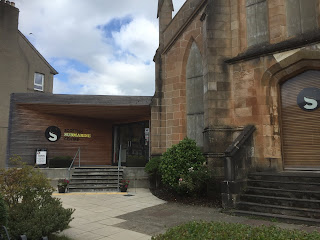 But this museum is nothing to do with that. Instead it is a celebration of the X-Craft, a small submarine most famous for the daring attack on the German battleship Tirpitz during the Second World War.

Inside I was greeted by a man named Brian Keating who has worked hard with the other team members to make this museum a treasure trove of information on these legendary subs and he started to tell me the story of the X-51.

She was built as one of four mini-subs numbered 51 to 54 but once launched the X-51, also known as HMS Stickleback, was only actually in service for three years with the Royal Navy. She was sold to Sweden where she was renamed Spiggen (Swedish for Stickleback) and was used for their military for a number of years. 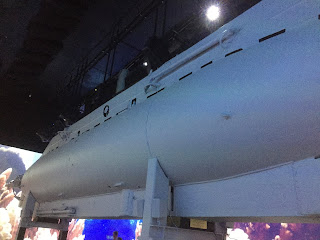 When the sub was retired it was held in storage back in the UK until the creation of the Scottish Submarine Centre and it was finally put on display in early 2018. Inside the hall the sub sits on a plinth with a video show projected onto the surrounding walls telling the story of the X-Craft and the journey of the submarine that you are now standing under.
What I thought was particularly interesting was the light show beamed onto the submarine body itself to show you what the different compartments contained and where they were. 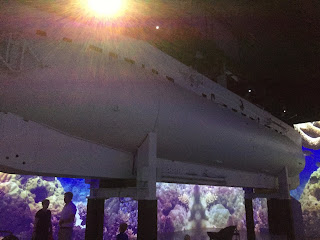 Speaking to Brian after the show he told me in more detail the future plans to commemorate other submarine events throughout history and how they had previously had a WWI centenary show on the anniversary of the armistice.

This small museum is a fascinating place to visit and for a donation of just £5 it is well worth it. Hopefully in time there will be more visitors and further funding as this museum has potential to be even greater and the staff are obviously very enthusiastic about what they are doing.

Posted by Disasters and Shipwrecks at 10:43 AM No comments:

Just after midnight on 15th February 1970 a robbery was taking place at the Sunnybank Mill in the centre of the town of Farsley in West Yorkshire. A man with previous experience in safe blowing and theft was armed with a shotgun and within minutes of him entering the grounds he had shot dead the night watchman, local man Ian Riley aged 32. 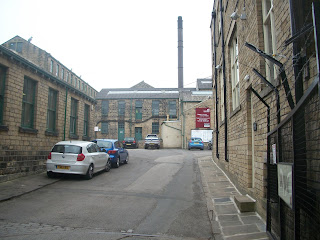 Alarms alerted the police to an incident and without realising how serious it was going to be the police arrived on scene and surrounded the buildings. Inspector Barry Taylor climbed over the main gate and found the gunman instantly. Without any regard for human life the burglar opened fire again and shot him before taking off into the night.

With two dead this now became a huge manhunt across Yorkshire with headlines announcing the tragedy of the unarmed men faced with a dangerous killer in such a quiet little town. Road blocks were set up in the hope of catching him with army helicopters scouring the countryside. 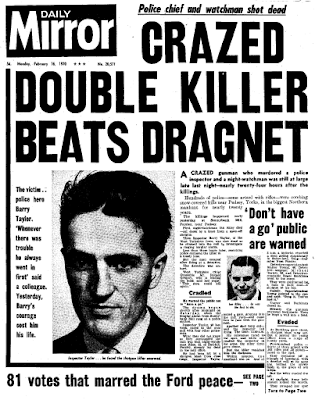 Just two days later 31 year old Neil Adamson was arrested in Colne, Lancashire. That day he was officially charged with double murder. John Depledge was charged with assisting an offender, giving Adamson food and water and helping his journey across the country.

The evidence was pretty much open and shut, with the killer pleading guilty to the two murders and 7 further charges of burglary. He was sentenced to life in prison with a minimum of 30 years. A few months later his friend was locked up for four years. Adamson never did get released, he died behind bars in 2000.

With almost fifty years since this attack on two unarmed men it is becoming part of the history of this country that is fading from memory. Few people remember what happened there and even fewer know the story.

A few years ago I decided that I would campaign for a plaque at the site (or close by) and write the story of what happened in a book. This story is not just a brutal killer taking lives, but it is of heroes who hunted him down, the investigators who brought him to justice and those families who were left behind to cope alone.

Today I have had the backing of the relatives of both Inspector Taylor and Ian Riley for a memorial and for the story to be told in as much truth as possible. The Mill owners are also in talks with us to make this a reality which will hopefully be in time for the 50th anniversary.

In order to achieve this I would very much like to speak to other people who were there that day, the police teams involved or the locals who remembered the search. Any information on this would be helpful.

I can be contacted shipwreckdata@yahoo.co.uk or through the Facebook group Remember the Farsley Murders 1970.