Famous people who have had a lucky escape from air disasters

My last blog looked at the tragic deaths of many major stars that were well loved and talented. But there are several people who have escaped death in such disasters too. Here are some headline-hitting cases of near disasters by some of the world’s most famous people.

Leeds United Football Club (left) – On 30th March 1998 the team were returning home following a 3-0 defeat at West Ham when an engine exploded on their British Aerospace 748 Turboprop owned by Emerald Airlines. Their pilot, Captain John Hackett, guided the aircraft down to Stansted Airport where the aircraft scraped across the runway nose-down, the engine by now ablaze. All 40 passengers and four crew got off safely with just two injuries. The pilot was hailed a hero and saved Leeds United from certain death not long after the 40th anniversary of the Munich commemorations. 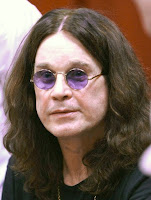 Ozzy Osborne – Rock star Ozzy and his family have become household names in the last 50 years or so, but on 19th March 1982 the Osborne’s were to escape death in a very public way. The ex-Black Sabbath singer was touring with his friend and guitarist Randy Rhodes but while Ozzy was taking the bus, Randy was flying with a hairdresser and pilot when it narrowly missed the bus and crashed in flames killing all three on board. Just a few feet lower and the occupants of the bus would have been wiped out.

Yassir Arafat (left) – The Palestinian leader was in a private plane over the Libyan desert on 9th April 1992 when a sandstorm brought down the aircraft. Of 13 people on board, three were killed and the plane was not found for 12 hours. By then he was located battered and bruised but otherwise OK. The treacherous Sahara Desert and the impact of the crash making this survival story a quite remarkable one giving the odds.
Harrison Ford (below right) – The actor famous for portraying adventurer Indiana Jones has had his fair share of dramas himself, not least him being accident prone. On 6th March 2015 he was piloting his single engine light aircraft when it got into difficultly over Los Angeles. He remained calm and carefully brought it down low over a golf course before crash landing, the aircraft being a complete mess but incredibly the 72 year old survived with just cuts and bruises. He had previously been in two other aircraft emergencies. 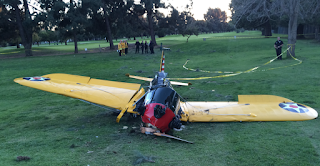 Travis Barker/ DJ AM – On 19th September 2008 a Learjet carrying six people was taking off from Colombia Metropolitan Airport in South Carolina when it overshot the runway and crashed killing four people. The two survivors were musician Travis Barker from the band Blink 182 and DJ Adam Goldsteain, also known as DJ AM. Although their injuries were serious burns both survived the crash, although DJ AM was found dead less than a year later due to drugs.

John Lyndon (left) – On 21st December 1988 the lead singer of the punk band The Sex Pistols, “Johnny Rotten” was booked onto Pan Am flight 103 for the transatlantic flight but his wife was taking too long to pack. They ended up missing their flight and had to arrange a later one instead, but at 1902 hours the flight was ripped apart by a terrorist bomb and killed all 259 on board the plane and 11 on the ground when it hit the town of Lockerbie in Scotland.
Seth Macfarlane – Famous for his animated series’ such as Family Guy and American Dad, Seth was booked onto American Airlines flight 11 bound for Los Angeles on the morning of 11th September 2001. A mix up with the itinerary had him miss the flight and get the times for takeoff wrong. The plane was hijacked and flown into the North Tower of New York’s World Trade Center in what became known as the 9/11 attacks. Others who should have been either on the planes or in the buildings at the time of the attacks were names such as singer Michael Jackson, Duchess of York Sarah Ferguson and actor Mark Wahlberg. 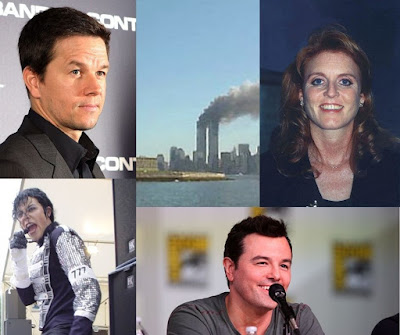 Posted by Disasters and Shipwrecks at 7:29 AM No comments:

Famous people who have died in air disasters 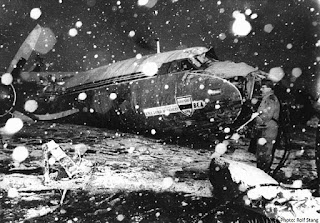 Celebrities are constantly in our newspapers and magazines for doing the most random of things, the press need to get hold of every bit of gossip to keep them on their front pages. They are, after all, what sells the media in the first place. But when tragedy happens the world is suddenly shocked that someone so famous could be cut down in the prime of their life. Questions like “how could this happen?” and “whey them” are often thrown around. But the truth is they are just human beings who are exactly the same as the rest of them.

When a famous death occurs the media once again go into a hype over them, but this time they have a new scope to work on, completely forgetting that in 90% of cases they haven’t died alone. So here is the start of a few blog entries where celebrities have died in tragic circumstances, today is those who were lost in air crashes throughout the years. This is by no means an exhaustive list. 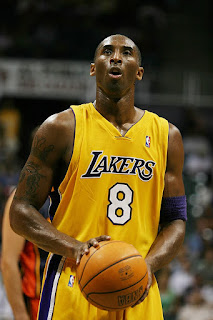 Bryant – (right) An American basketball player that became world renown for his skills during his 20 years with the Los Angeles Lakers. On 26th January 2020 a helicopter with and 8 others on board crashed in killing all on board. The cause of the crash was put down to pilots decision to fly in thick cloud which caused him to lose control of the aircraft. was travelling with his 13 year old daughter Gianna.

United – (Top photo) After going from strength to strength with the football team and finally heading into Europe, manager Matt Busby had high hopes for the star players of this world-renowned club, that is until their aircraft attempted to take off from on 6th February 1958 and crashed. 23 people died with 21 others injured. Among those dead were 8 footballers, three of their staff and two journalists as well as several passengers and the co-pilot. Memorials at Old Trafford, the Manchester United stadium honours their memory. 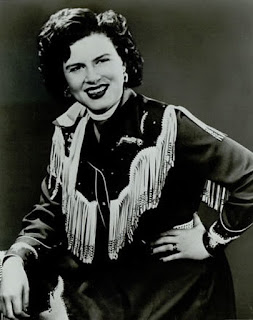 Jim Reeves – A singer-songwriter, Jim was popular from the 1940s until the 1960s with various country and popular hits throughout his career. On 31st July 1964 he boarded a light aircraft with his business partner Dean Manuel with the singer at the controls ready to secure a business deal with some real estate. The aircraft took off from and never reached its destination, the wreckage of the aircraft and the bodies of Jim and Dean not being found for two days.

Patsy Cline – (Left) Country and Western singer most famous for her hit “Crazy” in 1961. On 5th March 1963 she boarded a small aircraft for a journey home across the states after performing at a concert, stopping to refuel in . Soon after takeoff the aircraft crashed in bad weather in the town of , killing all four on board (three singers and the pilot).

Steve Fossett – Record breaking daredevil Steve was an American businessman who challenged himself to do things that nobody else had done, setting over 100 records in his lifetime including sailing, ballooning and flying. On 3rd September 2007 he took off in his light aircraft for a solo flight over the between and and never arrived at his destination. It would be a year before his crashed aircraft and his body was found by a hiker.

JFK Jr – American businessman and son of the late John F Kennedy, he was mostly remembered for his photographs of him as a child saluting the coffin of his father after his very public assassination. Photographers loved JFK Jr and so did the public, but on 16th July 1999 he took off from with his wife and sister-in-law on board to attend a wedding. The aircraft failed to arrive and a huge search was launched out into the near where the plane was last tracked. Several days later the bodies were found along with wreckage of the aircraft.

Aaliyah – (Left) Full name Aaliyah Dana Haughton, this singer and actress had appeared in films such as Romeo Must Die and Queen of the Damned. At just 22 years old she was returning to the USA from the Caribbean with friends on 25th August 2001 when the aircraft that she was travelling in crashed in the Bahamas killing all 9 people on board. 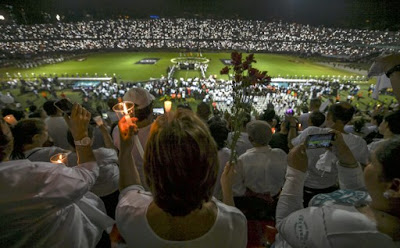 Remembering the Chapecoense football team
Posted by Disasters and Shipwrecks at 6:39 PM No comments: 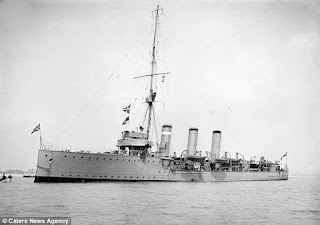 Everybody who knows about the wars at sea will be aware that the very first ship to sink due to the actions of a submarine was the USS Housatonic which was sunk by the Confederate 8-man submarine HL Hunley in 1864, but what many do not know is that there would not be another ship sunk in this way for another fifty years.
Submarine technology had come a long way in such a short time and in August 1914 the First World War showed the world that this deadly undersea weapon was the most formidable of them all. It was just one month after Britain declared war on Germany, and the U-21 was patrolling off the Scottish coast looking for a target. So far the sub had been unsuccessful, but on the morning of 5th September, commander Otto Hersing found that his luck may have turned when he spotted a ship through his periscope. 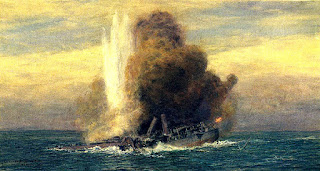 The ship he saw was the cruiser HMS Pathfinder, launched only ten years previously and 370 feet long, her three funnels and extremely tall fore mast providing a positive identification of a target that the U-boat was looking for. The ship was just under 3000 tons, had a crew of 289 and was armed with ten 3-inch guns and ten smaller calibre guns all along the upper deck. Built in Birkenhead, she was completed just one year and two days after her launch.
What was astounding as the submarine lined her up for attack was that Pathfinder was short of coal and could only make 5 knots, an easy hit for a modern submarine to chase. At 1543 hours a single torpedo was fired and just two minutes later it struck the ship just under the bridge. What happened next shocked everyone as the magazine was penetrated and the bags of cordite detonated sending a huge explosion skyward, ripping the Pathfinder in two. 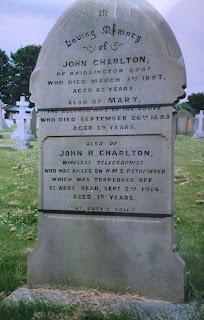 The ship immediately sank, so quickly that no lifeboats were launched; all that was left within minutes was a drifting of wreckage, oil and bodies. Ships sped to the area to search for survivors but in the end there were just 54 left alive after several who were initially found alive died later. These figures are disputed by some sources that claim that there were just 20 survivors out of 270 on board. However many were lost/saved, the sinking of the Pathfinder was a huge disaster for the Royal Navy and a great victory for the German U-boats.
Pathfinder became the second ever ship to be sunk by a submarine and the first to be sunk by a sub using a torpedo. The wreck of the scout cruiser now lies at a depth of 48m in the North Sea off St Abbs Head, she is officially classed as a war grave.
In the East Yorkshire town of Bridlington a grave of one of those who died on board Pathfinder stands proud in the town cemetery. John Raywood Charlton was a Telegraphist on board when he died in the sinking aged just 19; his body was recovered from the sea and returned to his home town. The Bridlington Sea Cadets have named their base TS Pathfinder in tribute to the ship and her town connection, one that lives on through the name and will now never be forgotten.

Posted by Disasters and Shipwrecks at 9:24 AM No comments: