World War 2 had its fair share of major incidents that cost hundreds - if not thousands - of lives and the war at sea was the worst of them all. When war was declared in September 1939 the destroyer HMS Duchess was in the Far East as part of the China Station and was told to head back home with her task group via the Mediterranean. 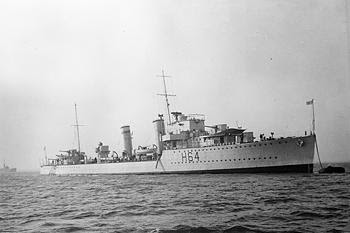 Going through the Suez Canal and into the Med, Duchess found herself operating out of Malta and Alexandria providing escort to a convoy and exercising with other ships of the Royal Navy. Her final mission was to escort the battleship Barham back to the UK along with several other destroyers, some of which would change over halfway through the trip.

Finally sailing from Gibraltar on 6th December 1939, the Barham, accompanied by the Duchess and Duncan, headed into the Atlantic up the western coast of Ireland where on the night of the 11th she had been joined by three further escort ships out of the Clyde - Echo, Eclipse and Exmouth. 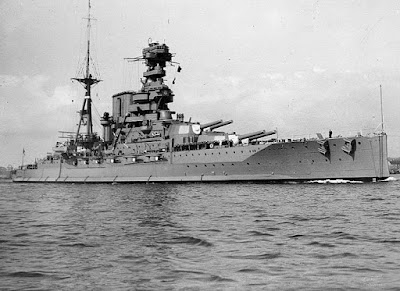 But in the early hours of 13th December the six ships approached the final leg of the journey towards the River Clyde in sight of the Mull of Kintyre. In the darkness the ships were forced to adopt a zig-zag plan to avoid enemy submarines thought to be lurking in the Irish Sea and which had already sunk several ships.

Suddenly the Duchess was seen to cut across the bow of the Barham with disastrous results as the huge battleships bow cut deep into the smaller ships side. Rolling over and starting to sink, the upside down hull of Duchess was immediately illuminated by the escorting ships and with the SONAR dome now sticking up into the air the ships thought that this was a dreaded U-boat and were preparing to attack.

Soon it became apparent that this was the upside down Duchess and a rescue operation was mounted, with the destroyer sinking less than half hour after the collision, huge explosions being seen as the depth charges set off after falling from the ships upper deck. Survivors in the water were picked up but these were few - only 23 were found alive, with 136 dead.

The fleet then turned back towards the River Clyde once it was apparent that there was little that could be done.

With the war being only 3 months old this disaster was barely reported in the press. At the same time on the other side of the world the Battle of the River Plate made the positive headlines that were needed for Britain and a boost to morale - especially when images of an enemy warship burning were thrust onto the front pages just days later. Buried in the newspapers were scant reports on the loss of the Duchess just a few miles from land.

The wreck of the Duchess was located in 1966 and has been passed over by SONAR during surveys by the Royal Navy on several occasions. To date she has never been dived, most likely owing to the depth of water at 119m being too far down for regular sport divers.

In Boulge, Suffolk, at the Church of Saint Michael there is a memorial window to the Duchess, the words reading:

Sacred to the memory of Lieut Comdr Robert Charles Meadows White, Royal Navy. Eldest son of Sir Robert White Lt and Lady White of Boulge Hall and of the officers and ships’ Company of HMS Duchess which was sunk in active service December 12 1939. 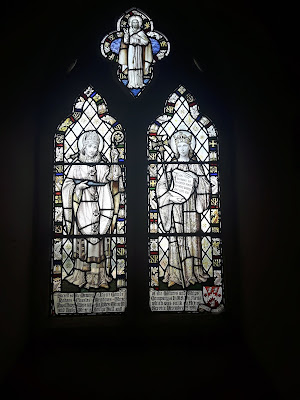 When I first heard of the Duchess it was from a veteran of the Second World War who lived in Bempton near Bridlington. Bill Doubleday had served on the Barham and had gone on to have a naval career that had seen him travel the world. But it was his mentioning of the sinking of Duchess which made me want to learn more. Why was this ship so forgotten? Although I don't think he was on board for the disaster he certainly knew about it, probably from his shipmates who had been there at the time.

I decided I would write about this ship and although it took 15 years of digging through archives and hunting people down I finally published Collision in the Night in September of 2018. With photos of some of the people who never returned and a story of a ship which only lasted around 5 years, this is final testament to a crew of sailors who saw the world yet would never see home again. 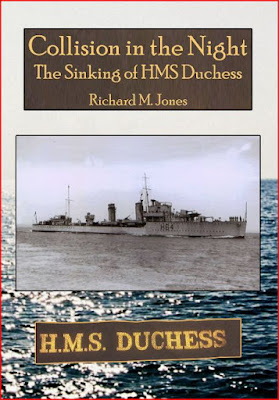 Posted by Disasters and Shipwrecks at 5:36 PM