The Sinking of HMS Barham 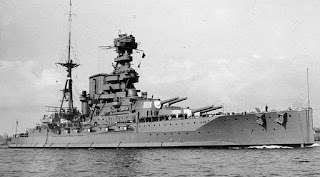 Of all the warships in the Royal Navy that have gone down in history, the story of HMS Barham is one that has been told many times, not least because her demise was caught on camera so horrifically and a completely unrelated incident involving the supernatural led her to be in the news for what can only be described as a bizarre case of modern day witchcraft.

Barham was launched on New Years Eve 1914 on the River Clyde, one of five Queen Elizabeth class battleships that was 643 feet 9 inches long, around 33,000 tons and carried an impressive armament of four 15 inch guns on two forward turrets. With over 1000 crew on board, she was built in a time when the Dreadnoughts were the up and coming warship, more powerful and heavily armoured than anything launched before, and Barham was one of those ships. Not least because she had been launched as the world was plunged into war just a few months earlier. 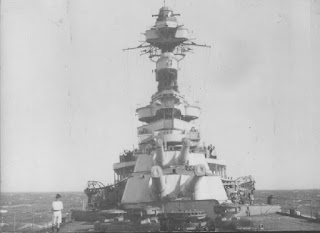 After she was commissioned in October 1915 she found herself at the Battle of Jutland on 31st May 1916 which was both a victory and a disaster for both sides. She was struck by German shells several times which left 26 of her crew dead and dozens more injured. Her war service continued and she was present at the final surrender of the High Seas Fleet in 1918.

21 years later she was part of the Mediterranean fleet when the Second World War was declared, so her mission now was to head back to British waters and join the home fleet. As she neared the at the top of she was met by several escort destroyers to add to the others that were already in a protective screen around her. But in the early hours of 12th December 1939, as the fleet reached the Clyde approaches off the Mull of Kintyre, one of these escorts, HMS Duchess (below), was struck by the Barham and sank. 136 of her crew were killed, there were only 24 survivors. (For more information on this my book Collision in the Night tells the story of the Duchess.) 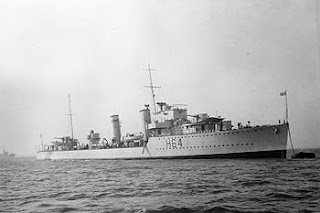 So Barham now sailed around the Atlantic and assisting with operations which included a U-boat torpedo striking her causing enough damage for her to put about and head for repairs. Soon back to sea she took part in several engagements where her guns were blazing against the enemy forces and in November 1941 she was heading out of hunting for Italian convoys.

On 25th November the submarine U-331 saw the fleet and fired four torpedoes at the Barham, three of which struck the ship in quick succession. The huge battleship rolled over slowly as crew fought to escape the sinking ship, but at this exact moment the warship Valient was doing something that would propel the death of the Barham into history. On board the Valient was a cameraman filming the ship for Pathé News.

The Barham was rolling right over onto her side when suddenly the magazine blew up and hug
e pieces of the ship flew in every direction. The sight was shocking and the smoke enveloped everything around it. By the time the smoke had clearend, Barham had gone. 862 of her crew were killed, the nearby warships managing to rescue 487 survivors, two of whom would die later. 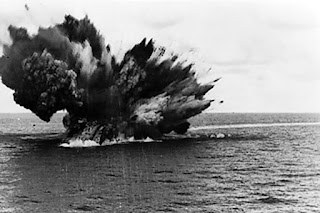 Meanwhile in a woman named Helen Duncan was conducting a séance in front of an audience and announced that a sailor had come to her and said that the warship HMS Barham had been sunk. The military immediately took an interest in this because nothing official had been released yet, therefore how she got that information was a mystery (this could have been simply hearing from a relative who had received an official death notice before it was made public). She was arrested and became the last woman in to be tried for witchcraft and fraudulent spiritual activity.

The Barham wreck has never been found, but she lies somewhere in the Eastern Med. Maybe some day we will gaze upon her once again.

Memorials to the Barham are dotted around the country at various war memorials, one being at the National Memorial Arboretum which I visited in 2020. 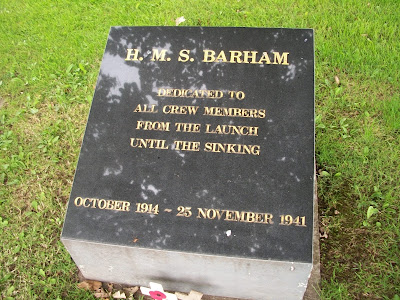 Posted by Disasters and Shipwrecks at 8:34 AM