The Legend That is Bismarck

You might not think that Teenage Mutant Ninja Turtles would spark a fascination with a sunken German battleship, but as an 11 year old boy holding one of these kids novels back in 1992 that is exactly what happened. This pack of children's books given to me at Christmas was something of a turning point in my life and it certainly wasn't to do with the Turtles! In one of these books the heroes find themselves in a situation where relics from the seabed are being salvaged and right at the very end (spoiler alert!) the nameplate of the Bismarck drops on the deck and the mystery is solved. This is the point where I found that this was a real ship and I was desperate to find out more.

Within weeks I had found the book Exploring the Bismarck in the local bookshop and to my astonishment the author was Robert D Ballard......with the words underneath "Discoverer of the Titanic" which was already becoming an obsession of mine.

So the years went by and Bismarck still fascinates me today just as much as it did when I was a young lad. 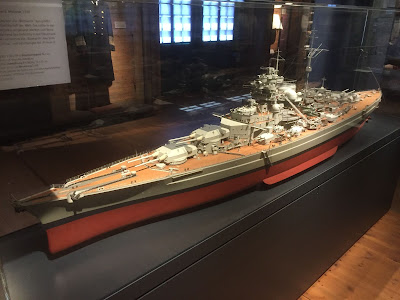 The story of the Bismarck begins just before the start of the Second World War when what became the worlds largest warship was constructed at the Blohm and Voss shipyard in Hamburg, Germany, with a launch on 14th February 1939 by Hitler himself. This overtook the current record of
largest warship which at the time was the British battlecruiser HMS Hood.

For the next two years the Bismarck was fitted out with her machinery, equipment, stores and most of all her crew. Over 2000 sailors manned their stations and with the war now in full swing it was time to see the ship flex her muscles.

Code named Exercise Rhine, she slipped out of German waters and headed north past Norway in company with her escort ship, the cruiser Prinz Eugen. But this was a badly kept secret when both a Swedish cruiser and a British Spitfire spotted her. Not only that several ships of the Royal Navy not only saw her but began tracking her where they suspected she would break out into the Atlantic using one of several passages. Ships moved into position in anticipation of a forthcoming battle. 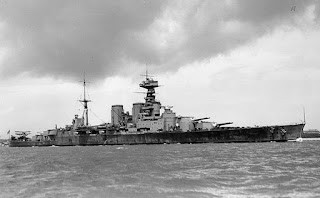 The route Bismarck chose was the passage between Iceland and Greenland, known as the Denmark Strait. On 24th May 1941 the two ships met their nemesis for the first time - HMS Hood (left) along with the brand new battleship Prince of Wales. What happened next shocked the world - Just a short, sharp battle saw the Hood explode and sink with only three survivors. Prince of Wales was too damaged to continue and retreated. The two German ships carried on their mission in triumph but not without finding out that Bismarck had taken a small amount of damage - a hole causing an oil leak. Nothing too bad but one that would provide their enemies with a location beacon.

Following the loss of Hood, Bismarck and Prinz Eugen went their separate ways and the battleship made the decision to head to France for repairs. Using a high seas manoeuvre that confused the Royal Navy for a short period of time, Bismarck did a double back on herself and disappeared.

A period of 24 hours went by where ships and aircraft frantically searched for this terror of the seas, it was on 26th May that a Catalina flying boat located her and radioed her position upon sighting. By now she was too far away for the capital ships to catch up, but not for the Swordfish biplanes from two of the pursuing aircraft carriers HMS Victorious and HMS Ark Royal. 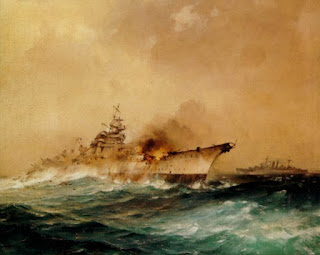 Several attacks by these tiny aircraft, which carried just one torpedo each, left the Bismarck crippled by one particular lucky shot. A torpedo almost missed the Bismarck and instead detonated at her stern, jamming her rudder during a turn and causing the mighty battleship to start sailing in huge circles - a situation that meant the huge fleet of pursuing warships could now catch up to her. 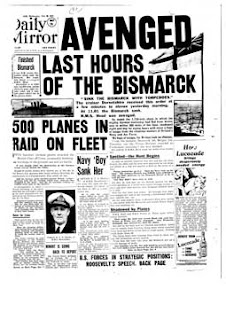 On the morning of 27th May 1941 the fleet attacked and in around two hours of heavy fighting the Bismarck was doomed. Salvos from HMS Rodney and HMS King George V as well as torpedoes from HMS Dorsetshire meant that there was no going back and fires broke out all around the vessel. The order was given to scuttle the ship but the damage caused would have caused her to sink either way. At 1039 that morning the ship raised her bow into the air and rolled over, hundreds of German sailors were now struggling for survival in the Atlantic.

Although the British tried to rescue as many survivors as possible, word came through of a U-boat sighting and they were forced to retreat. Out of a crew of 2200, only 114 survived.

The survivors were taken to prisoner of war camps in Canada before being released after the war, each one holding their own memories of a ship that lived on her first mission for less than two weeks.

Bismarck once again made headlines when Robert Ballard led an expedition to search for the wreck. In 1988 he discovered wreckage but this turned out to be the remains of an old sailing vessel. He returned the following year and on 8th June 1989 the first images of the Bismarck wreck were seen for the first time on board his research vessel Star Hercules. 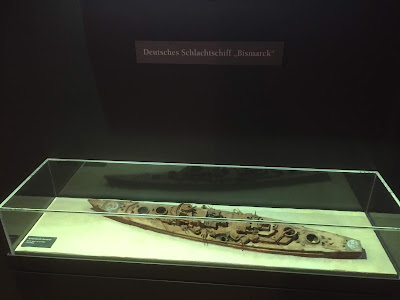 Ballard conducted the first survey of the wreck and found that all four of her main guns were gone (held in by their own weight they fell out when the ship capsized), her stern had broken away near the point of where the torpedo had struck and a lot of the superstructure had been swept away. The most haunting image was the huge swastikas on both the foc's'le and stern which had been painted over in 1941 to prevent enemy identification. This plus the vast amount of sailors boots that lay on the seabed.....some of them in pairs where the owners had landed nearly five decades before. 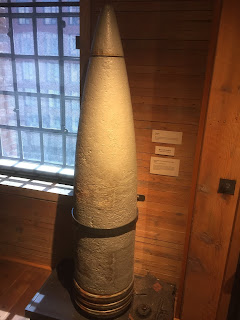 Since the first expeditions there have been other visits to the wreck which have shown the world the Bismarck from some incredible angles. In 2001 shipwreck hunter David Mearns discovered the wreck of the Hood and paid a visit to the Bismarck on the same expedition, showing both warships in a fascinating series of documentaries like never seen before. Oscar winning movie director James Cameron of Titanic fame also filmed the wreck using the latest technology to see the wreck in even greater detail.

Today the Bismarck has memorials to her dead as does the Hood. Commemorations of both ships take place side by side, although today there are no survivors left from either ship, the last Bismarck survivor passing away in 2018.

The ships are not only remembered but celebrated for the marvels of technology that they were. The battles are pored over by historians and authors, museums allow visitors to marvel at their displays and books telling the story of these incredible war machines will forever keep the memory of the Bismarck and all her sailors alive. 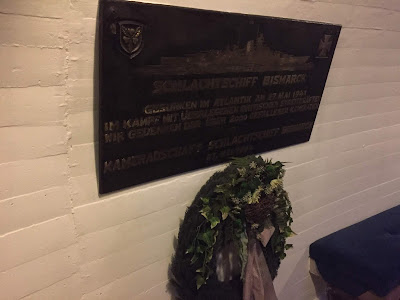 Posted by Disasters and Shipwrecks at 8:58 PM