Rescue of the Saint Malo ferry 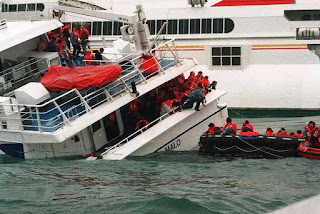 The Channel Islands at the very south of the and only a few miles north of the French coast have for hundreds of years been a stopping point for ships transiting the area and providing a safe haven for those sheltering from storms before continuing their journey. But the countless shipwrecks surrounding these small islands leave the sailor in no doubt that these are also dangerous waters, with hidden rocks tempting the ships to come closer and claim them for their own.

As the modern day has been given way from the sailing age, the have claimed less ships, a motorised vessel being able to steer clear of the hazards and the Admiralty charts giving clear indications of obstructions, wrecks and other dangers to navigation.

But on the morning of Monday 17th April 1995, during the busy Easter holidays, the was host to a rescue operation that had not been seen in this scale for decades as the catamaran ferry Saint Malo almost became a victim of the rugged shores.

The twin hulled hydrofoil ferry was operated by Channiland, a French company that delivered hundreds of passengers at a time from the of , the Jersey capital, over to the smaller but nearby islands of Alderney and . Only two years old, the ship was 136 feet long with a beam of 36 feet, 585 gross tons and could carry around 300 people. 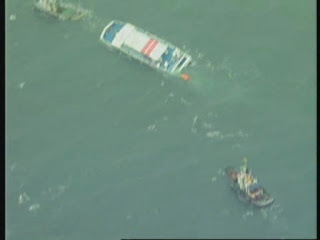 That day she sailed from Jersey at around 0945 and headed off towards Sark, the smallest of the . Her captain, Captain Philippe Peneau, was taking her past Cobiere Point at around 37 mph when he suddenly realised that the ship was off course. In an attempt to get the vessel back on track, he did not slow down and just 15 minutes after setting sail the vessel struck rocks and began to take on water.

With 307 people on board, they had a standard time of 30 minutes to evacuate the Saint Malo, liferafts were deployed and a distress call was sent. Ships in the area raced to the scene as the ferry started listing dangerously to port as one half was now completely filled with water, threatening to sink the rest of the vessel.

It didn’t take long for a nearby ferry to head to the site and with helicopters inbound the rescue operation was now in full swing. Many of the passengers were now jumping straight from the side of the ship onto the inflatable life raft and 55 people received injuries doing this. Some of the passengers caught the evacuation on camera and it was flashed on the news bulletins that day.

After 77 minutes the ship had been abandoned save for the captain and a few crew members, but this had taken over double the time it should have taken. The ferry was taken in tow and beached nearby, the tide exposing the damage caused by the rocks. 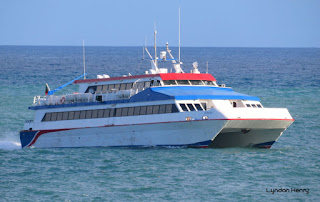 An investigation later blamed Captain Peneau for “recklessly endangered the lives” of his passengers, although no charges were brought in relation to this.

The Saint Malo was later repaired and put back into service, being renamed Condor France in 1996, Acacia in 1998, Spirit I in 2008 and finally she is still operating today as the Lovely I under the flag of St Kitts in the Caribbean (left).

In 1997 a sculpture of two clasped hands was placed on the cliffs above the area where the rescue of the Saint Malo passengers took place, a hundred people there to unveil the plaque and to commemorate the day that could have ended in disaster, it being described as a miracle and a testament to those who risked their own lives to save others. 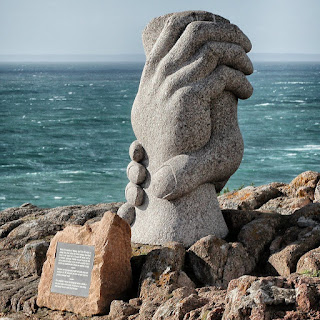 Posted by Disasters and Shipwrecks at 5:50 PM