The Wreck of the Stella

The word "hero" is thrown around a lot these days, but for some the title is well deserved and in the case of the passenger ferry Stella, this is one of them. At 253 feet long, this 1059 Gross ton vessel had the capacity to carry over 700 passengers on her routes from Southampton to the Channel Islands.

Built on Clydebank in 1890, she was owned by London & Southwestern Railway and had a successful number of years taking passengers across the Channel, her 43 crew tending to their every needs as the ship would plough the sometimes rough waters at a steady 19.5 knots.

On 30th March 1899 the Stella sailed from Southampton for her usual run to Guernsey carrying a total of 147 passengers making the most of the Easter holidays, although this was a considerably less number than what she could normally carry. As the ship proceeded at full speed she encountered fog, although her crew did not slow down and carried on towards her destination. 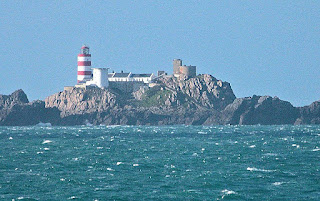 At 1600 hours that afternoon a group of rocks known the Casquets and clearly marked on charts came into view soon after they had heard the signal from the nearby lighthouse. Without a chance of avoiding them, the captain attempted to avoid them but to no avail as the ship ripped herself apart on the submerged rocks.

She must have been in a bad way for she was gone in just 8 minutes, in that time only four lifeboats were launched successfully. 86 passengers and 19 crew were killed. 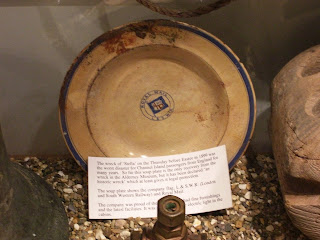 But as the reports were coming out about the sinking, the name Mary Ann Rogers came to light. She was a stewardess who had given up her lifejacket and had refused a place in the lifeboat ahead of everybody else. A passenger, opera star Greta Williams, was also hailed a heroine for comforting the survivors as they shivered in the boats close to death. The official inquiry in 1900 blamed the captain for continuing full speed, allegations of racing another ship to get to their destination first - a claim that was strongly denied.

The wreck of the Stella was found in 1973 in 161 feet of water. Further expeditions led to the documentary The Wreck of the Stella being broadcast in the 1990s showing footage of the lost ferry, since then several artefacts have been recovered including this plate now in Alderney museum. 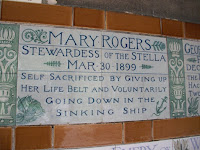 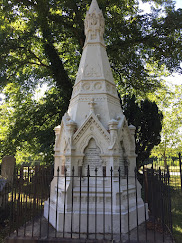 Several memorials were placed around the country for the victims of the Stella. Mary Rogers had a plaque in London's Postmans Park (right) as well as a monument in Southampton near the current ferry terminal (below). A few miles away in the grounds of Peartree Church a grave to the Rosoman family commemorates Richard Rosoman, one of those passengers lost that day (below). 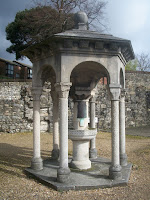 A stained glass window in Liverpool and memorials at St Peter Port ensures that this disaster is not forgotten for those who take the time to stop and look at these incredible monuments.

The Stella today remains one of the worst passenger ships disasters off the UK coast, yet few people know her as well these days. Back in 1899 she had made the headlines much like the Herald of Free Enterprise did in the 1980s, the shock of such a major blunder caused by the people who were meant to have their safety as their number one priority causing just as much scandal then as it would now. Thankfully the memories of the heroes of that day will continue to live on.


Posted by Disasters and Shipwrecks at 6:16 PM