Since aircraft first starting making their epic journey's there have been accidents. But it was the summer of 1985 that four major air disasters shook the industry, starting with a bomb taking down Air India flight 182 in June with 329 dead, the terrorists have still not been brought to justice. 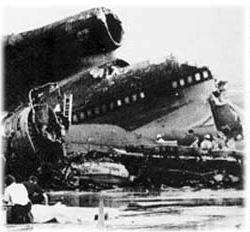 But in the August of that year there were three major disasters in less than three weeks.


On 2nd August 1985 Delta Airlines flight 191 suffered a bad case of "wind shear" upon the approach to landing at Dallas Fort Worth Airport. The airliner slammed to the ground and burst into flames killing 137 people, incredibly there were 27 survivors (one of those killed was on the ground). 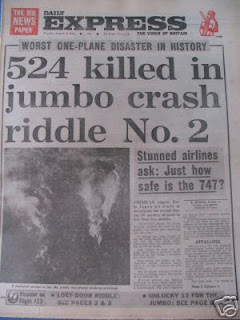 Ten Days later came the worst single plane crash in history. Japan Air Lines flight 123 took off with 524 people on board from Tokyo heading for Osaka. A previous accident had led to a faulty repair to the tail of the aircraft, over the years stress on the repair led to it suddenly giving way and having the entire tail fin rip off in mid flight.

The plane was now out of control, despite the pilots best efforts the Boeing 747 crashed into Mount Takamagahara near Mount Osutaka. Taking several days to get to the crash site, miraculously four survivors were found alive but this remains to this day the worst single airliner crash in history.

Again, ten days after this crash a third airliner disaster hit the headlines. 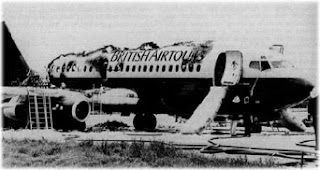 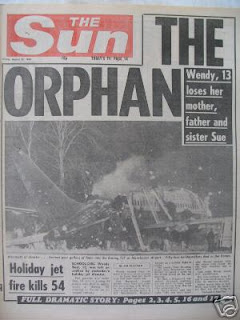 British Airtours flight KT328 to Corfu was on the runway at Manchester Airport ready to take off of 22nd August 1985. As the plane gathered speed on runway 24 an engine explosion caused black smoke to be seen billowing out of the wing. The plane did have the chance to stop before taking off but the resulting fire engulfed the entire aircraft and killed 55 people. Passengers were forced to jump from wherever they could, in some cases the wing itself.


Never before (or since) have so many air accidents in such a short space of time shocked the aviation industry as this month. Three separate disasters with three separate causes that resulted in the deaths of 712 people.

Posted by Disasters and Shipwrecks at 2:41 PM