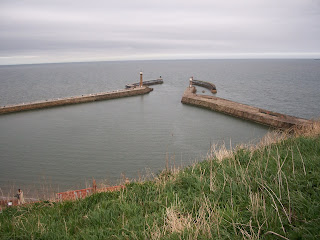 On 9th February 1861 a storm struck the East Yorkshire coast that would leave the town of Whitby grieving for their sons in a disaster that highlighted the bravery of their townsfolk like never before. From around 0830 that morning the town lifeboat, manned by local volunteers, was sent out on several occasions to assist the crews of vessels that had started to wallow in the heavy seas and come aground.

Time after time the lifeboat struggled in the biting cold and freezing seas to rescue the crews and no sooner had they landed back ashore another ship was seen to be in distress. Each time the crews could not simply stand by and let fellow sailors drown and so they gathered themselves together and headed out again despite the weather being appalling. Crowds of onlookers gathered on the seafront to witness the drama and cheer the lifeboat crew as they came ashore with another human cargo of wet but thankful survivors. 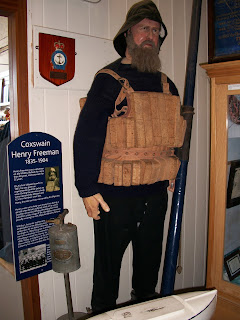 By 1400 that afternoon the cargo vessel Merchant went aground and the lifeboat was once again sent out to rescue the crew. But tragically on this occasion their luck ran out. The Whitby Lifeboat was attempting to rescue the Merchant's crew when waves took hold of the boat and threw her 13 occupants into the sea. One of the men, Henry Freeman, was wearing a new design of cork lifejacket and it is thought that this saved his life. When he was rescued it was then found that he was the only survivor.

The deaths of the 12 lifeboatmen left a staggering 46 children without a father and 10 wives without a husband. The town was shocked and immediately went into deep mourning for the heroes of the town. This became an event that would be remembered for decades to come and is still remembered today.

A memorial was placed in The Church of St Mary the Virgin on top of the cliffs overlooking the sea next to the ruins of Whitby Abbey (bottom right). The gravestones of some of the lifeboatmen, in danger of being damaged by weathering and land erosion, were carefully moved and placed up against the church walls in order to save them (below). 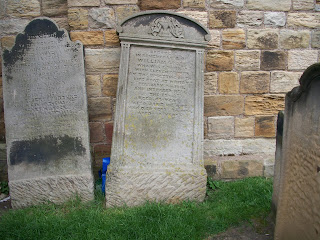 The sole survivor Henry Freeman was not put off by this disaster and vowed to continue to head out to sea. In fact he carried on manning the lifeboat and was the coxswain for 22 years, participating in many more rescues which not only earned him medals for bravery but which also led to him being one of the most celebrated and renowned lifeboat members in the history of the RNLI.

Freeman died in 1904 and was buried in Whitby Cemetery, his heroic career etched on his gravestone for all to see. An exhibition of the disaster and the exploits of it's most famous hero can be seen at the Whitby Lifeboat Museum in the town along with a life size statue of him (above). 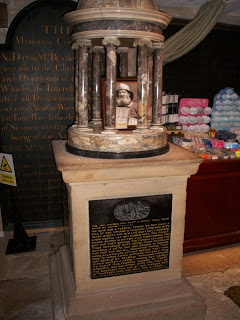 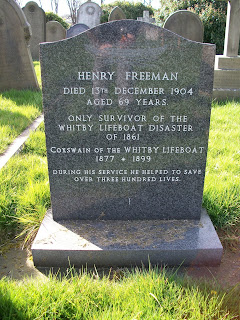 Posted by Disasters and Shipwrecks at 4:39 PM