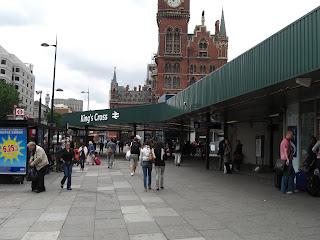 18th November 1987 was just like any other day in London and the commuters rushing to and from the city's underground train network paid no attention to the wooden escalators that carried them from the bustle of the crowds below back to street level. These wooden moving stairs had been around for years, the London Underground being the worlds oldest and largest subterranean railway network and the reason other countries copied the design.

But this evening was very different in what started as just a tiny mishap. Underneath the escalator on the Piccadilly Line lay years of rubbish, dirt and fluff that had built up and all it took was one cigarette or match dropped by a passenger to make its way between the gaps still lit. Initially it would have just smouldered but by 7.30 pm the first reports of smoke started to filter through to staff in the ticket hall above. 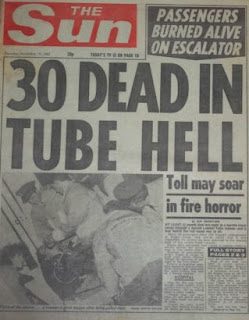 Within minutes the London Fire Brigade were called and station was already being evacuated by police via other escalators. The fire still seemed very small and shouldn't take long to extinguish. But within minutes of the teams arrival the fire had consumed the entire escalator and this led to a devastating flash over in the ticket hall above. The blast took everyone by surprise and very quickly became a major incident.

Trains were still coming into the station and the passengers were having to be directed out of the area of the fire, but by now in the chaos there were already 100 injured people being rushed to hospital. Thick smoke was taking over any breathable air and it became a struggle just to get to fresh air. The main hall was now and inferno and it took until the early hours of the morning to finally extinguish the flames and only then the final horror of what happened could be seen. The escalator and ticket hall were a blackened mess and a final count showed that 31 people had lost their lives. One of those who died was one of the Fire Brigade sent to fight the flames. Station Officer Colin Townsley's death came as a huge shock to the emergency services.

The inquiry in the coming months found that the litter and lubricant grease of the escalator had caused the fire to spread, smoking had already been banned following a previous fire years before at another station but it became apparent that this was regularly ignored by travellers passing through. London Underground were heavily criticised in the report and better training in the event of fire was implemented. The wooden escalators were slowly phased out, although the last ones weren't replaced until 2014.

Of the 31 people who died that night, one victim was not identified until 2003 when DNA testing revealed that he was a homeless man who had made Kings Cross his shelter. 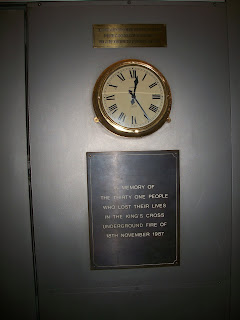 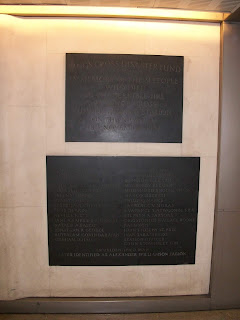 Today there are several memorial plaques which commemorate the fire. Three at the station itself (Above left and right) and also one over the road at St Pancras Parish Church (below). 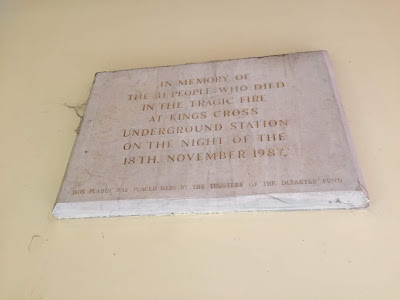 Posted by Disasters and Shipwrecks at 8:15 AM