Sinking of the Zenobia

The island of Cyprus has always been a wealth of history and the shipwrecks that litter the coast tell a story the gives the country its character dating back thousands of years. Just recently a huge Roman wreck has been discovered and this doesn’t come near to the incredible artefacts that have previously been found on others. 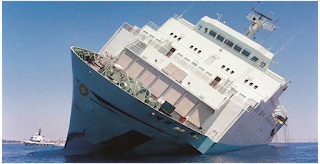 But the one shipwreck that Cyprus is best known for is that of the car ferry Zenobia. At 565ft long and a beam of 92ft she was a brand new state-of-the-art vessel that had only been built just a few months before her demise.

In May 1980 she had departed Sweden on her maiden voyage destined for the Mediterranean with a cargo of lorries, stopping at Heraklion (Crete) and Piraeus (Greece) before heading east towards Cyprus and her final destination of Syria. En route the captain noticed a list to port and after correcting this thought no more about it. 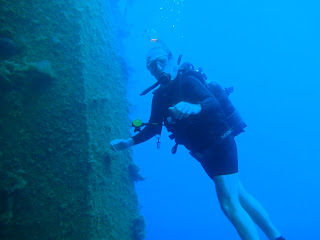 On 2 June as she arrived in Larnaca the problem reoccurred and the crew determined a software problem with the ships computerised ballast system was over filling the ballast tanks causing the ship to list. Everytime it was corrected the computer would think it required a re-adjustment and continued to over compensate.

The ship was towed out to an anchorage point to prevent any incident blocking the harbour while the crew attempted to fix the issue. With a dangerous list now becoming obvious the captain ordered the crew to abandon ship. She eventually listed so far over her hull began to take on board seawater and in the early hours of 5th June she silently rolled over and sank just a mile from shore. 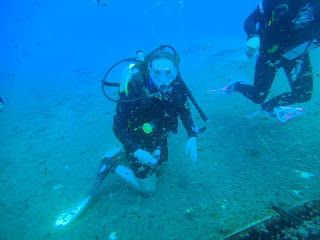 Incredible images of her at a 45 degree list have become synonymous with the short life of this brand new ferry. But it is the story of her since the sinking that have been the talk of the locals, for she is now resting at a depth of between 16-42 meters making her one of the largest most accessible shipwrecks for SCUBA divers and ranking her among the worlds top ten best wreck dives.

Since that day she has been mapped constantly by divers who are training to professionals who explore deep inside the ships interiors.

In the October of 2015 myself and a fellow diver Jade Convery booked a days diving on this magnificent wreck to see just what the fuss was about – and we were not disappointed.

The dive boat was one of half a dozen anchored off the wreck which showed that the money made for the local tourist trade was worth far more over the years than what the ferry cost initially! A map of the wreck was shown to us by the dive boat team leader and we got out kit together ready for a dive.

With the waters of Larnaca still warm and a bright sunny day, Jade and I descended to the side of the enormous wreck where immediately the ships portholes were instantly recognisable. Snapping photos along the way on a digital camera it amazed me just how clear the water was and how well preserved the ship was despite the decades of visitors and storms. 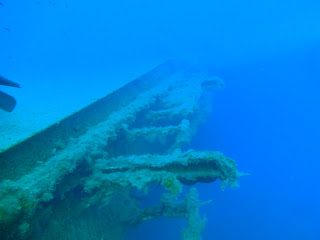 Gently swimming over the remains of lorries and cranes, we had to have our heads right to make sure we didn’t split up from out dive team, there were so many other tourists that could accidentally get mixed up in each others packs and before you know it you are surfacing with people who you have never met! The wheels and cabs of the vehicles are strewn around the upper deck, twisted at a crazy angle but incredibly still in position (mostly). With a cargo of 104 of these trucks they have not lost their ability to be recognised and have kept their shape despite (at the time) 35 years of sea growth and rust. 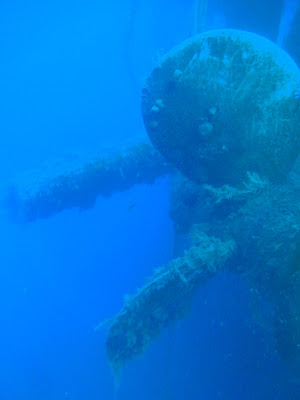 The second dive took us over the starboard side of the vessel and into a large opening that I’m told was the cafeteria. What once should have been bustling with passengers and lorry drivers is now a silent watery chasm with only the fish to keep you company. Exiting through what looked like a skylight we hovered over one of the ships massive propellers, although covered in rust and sealife, they were unmistakable.

Finishing a dive like this required a few minutes of decompression time where we hovered at 3m depth until the dive computers told us that we were safe to ascend. The team leader had done this dozens of times so following him was the back up if the contraptions failed for whatever reason.

Re-emerging into the afternoon sun we both felt like we had done something amazing that day, after all this was the wreck that every diver in the world knew and loved! Despite the two dives there was so much more to explore and I should imagine that it would take several dozen dives to fully go around this giant of the sea.

But for now the Zenobia will continue to attract the tourists and thrill seekers as well as the photographers and wreck hunters. She shows no sign of crumbling away to nothing which means the revenue from this one accident will keep this town and its businesses thriving for many years to come.

Posted by Disasters and Shipwrecks at 6:40 PM