The steamship Rohilla is one that is famous in the small North Yorkshire town of Whitby but for both tragic and heroic reasons. Built as a passenger ship for the British and India Steam Navigation Co in 1906, she was fitted out as a hospital ship at the start of the First World War to cater for the amount of casualties expected in the impeding battles that were going to be taking place on the continent. 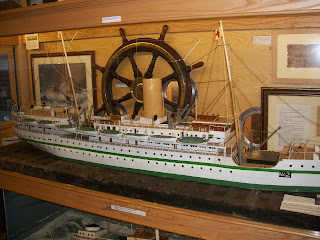 On 30th October 1914 the Rohilla was heading towards the French coast with 229 people on board when she grounded on rocks in a gale and despite efforts to free her she remained stranded. A huge rescue operation was launched from shore, but with her being so close to land it was surprisingly difficult to affect a rescue. Several lifeboats were sent out as well as the coastguard using rockets from the beach to attempt to provide a line for the exhausted people to cling on to eventually led to more and more people getting off the ship alive. 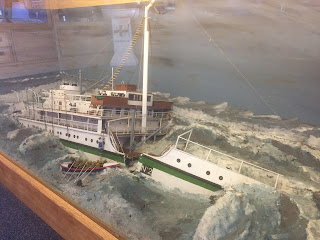 But as the ship broke up in the storms she settled lower and lower and after three days they managed to get a total of 146 survivors on dry land. As the newspapers captured the rescue operation for their front pages, the tragic ending was that a total of 83 people lost their lives, so close to dry land. The rescuers on the beach and the RNLI lifeboat heroes were celebrated for doing a marvellous job in such testing circumstances. 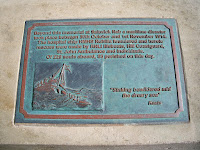 Today the remains of the wreck of the Rohilla are scattered across a wide area with several large parts exposed on the rocks at low tide at the foot of the cliffs. The wreck does get dived on and several interesting artefacts from there are today on display at the Whitby Lifeboat station which doubles up as a museum holding two large models of the ship (one as it was in her heyday, another of the wreck rescue), dozens of artefacts such as the life ring (right)  and all the information about that day that you need to get an idea of just what they had to go through.

At the entrance to the harbour a plaque (right) commemorates the disaster just a few hundred yards from where it all took place a century before. Another memorial (below) in the cemetery also serves as a marker to the mass grave that now unite 33 of those who died together on that ship that was meant to be a place of refuge and safety. 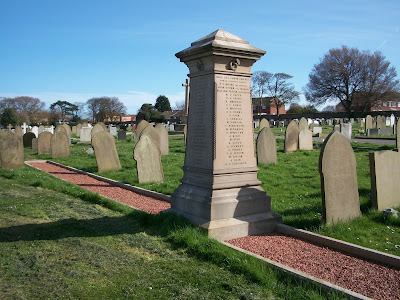 Posted by Disasters and Shipwrecks at 8:59 PM