Sinking of the Eastland - Disaster in Chicago 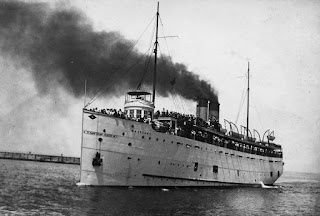 Of all the disasters I have written about, few of them are as unbelievable as the SS Eastland, a vessel that met her demise while she was still alongside and tied up to the wall. Just three years after the world was shocked by the loss of the Titanic and one year after the Empress of Ireland, it seemed that passenger ships were in a vulnerable position, but nobody expected what happened to the Eastland.

On Saturday 24th July 1915, Western Electric were holding their fifth annual employee picnic and thousands were ready to enjoy themselves by taking a trip on board the ship moored on the Chicago River. Their destination was Michigan City in Indiana and the journey was half the fun on board a ship that was known as the "speed queen of the Great Lakes"...... a reputation cemented by the numerous journeys across Lake Michigan.

Launched in 1903, she was 265 feet long and had gone through several owners until finally being purchased by the St. Joseph-Chicago Steamship Company in 1914.

Passengers started embarking at 0630 that early morning and under a light rain shower, around 2500 had crowded onto the Eastland ready for the departure an hour later. This was the maximum amount of people that was allowed on board and the band began to entertain the guests who were in the summer festive spirit. 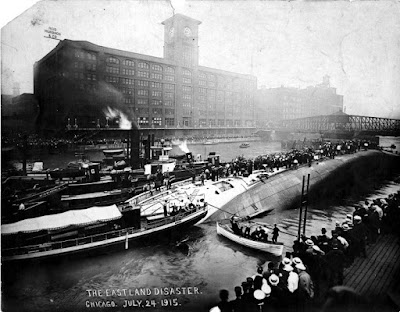 The vessel starting listing port and starboard with the huge amount of people moving around, nobody paying any attention to the rocking until suddenly the list to port caused everything to suddenly slide down and not come back up. Passengers began to panic as everybody piled on top of each other, screams as the ship rolled over and the side of the ship gently settled into the Chicago River bed.

Those watching from shore cried out in horror as hundreds of people were so close to safety, yet so far to reach. Although the captain sounded the alarm, it was too late to do anything. The Eastland lay on her side like a beached whale.

A huge rescue operation was launched and people were pulled out of the water by nearby tugs, bystanders jumped in to save those struggling to stay above water, the Chicago Department of Health sent several people to give medical assistance and people with every kind of skill descended on the scene. 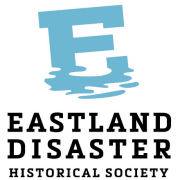 Before too long the Eastland was crawling with divers, welders, doctors, coastguard, police officers, fire crews and volunteers to help get the people out that were trapped withing the wreck. But it didnt take long before the bodies of the dead were being retrieved. In all, 844 people lost their lives including 22 entire families.

The wreck was raised and later sold to the US Navy where she was renamed USS Wilmette and went on to have a long and distinguished career which included hosting President Roosevelt during the Second World War planning meeting. 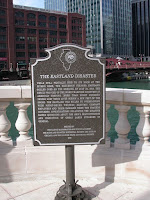 In 1947 the Eastland was scrapped, but the memory of what happened to her in 1915 would always leave a scar on the people of Chicago. Today a plaque commemorates the exact spot where this shocking disaster took place.


The Eastland Disaster Historical Society was set up to help remember the Eastland and has spent many years collecting information on every aspect of what happened, each year leading the memorial ceremonies that reunite the families of those who would forever be linked with this small area of the Chicago River. Each year brings more people who are fascinated to learn the story of how so many came to grief just a few feet from the safety of dry land. 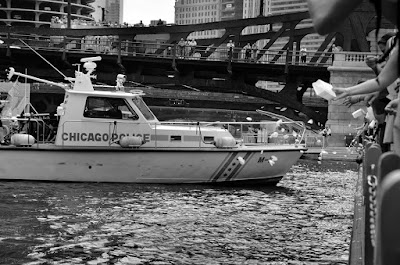 100th anniversary commemorations (above). All photos courtesy of Eastland Disaster Historical Society.
Posted by Disasters and Shipwrecks at 8:23 AM