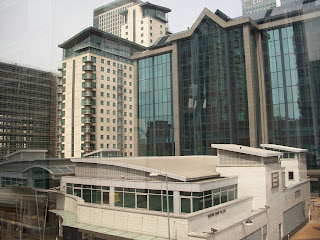 For almost 30 years there had been conflict on the streets of Northern Ireland between those who wanted a united Ireland and those who wanted to remain part of the United Kingdom. Trapped between the two warring sides were the British government, military and in a lot of cases civilians who couldn’t care less. With a terrorist bombing campaign by the Irish Republican Army costing the lives of hundreds of people, taking the fight to mainland Britain, particularly built up cities in the pubs, gatherings and ceremonial events, each attack would make headlines. But in 1994 the IRA agreed a ceasefire while peace talks commenced, this lasted until early 1996 when they decided that these talks were going nowhere and the ceasefire was to be ended. 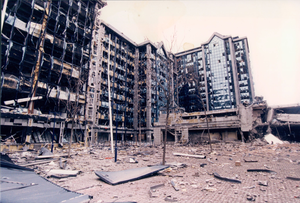 At around 1730 on the evening of 9th February 1996 a series of bomb warnings was received giving details of a vehicle loaded with explosives in the London Docklands, the area around Canary Wharf being the financial capital of the UK. Home to the media, banking, trade and finance, the alert went out to evacuate. The time for detonation was given as 1800 hours, they had less than half hour to get everybody clear of the area. 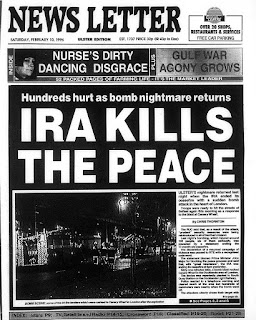 Police raced to the scene as thousands of people were herded like cattle into the streets and away from the main buildings. By 1848 a truck was located at South Quay Plaza and an officer ran to warn to men, Inam Bashir and John Jeffries, in a newsagent to evacuate, they hurried to quickly lock up their shop. At 1901 hours the truck bomb detonated with a huge blast, shattering glass for hundreds of yards in every direction, a huge crater all that was left of the truck.

The two newsagent staff were killed in the blast and several others were injured, the devastation of the office buildings in the vicinity of the blast caused £150 million worth of damage and several of these had to be demolished. 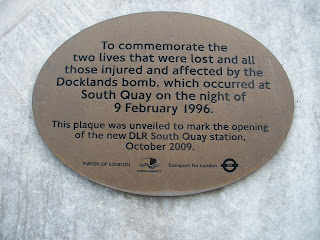 In April 1997 a raid by the SAS captured a number of IRA members, one of whom was James McArdle who was a match for a thumbprint found on the wreckage of the truck. He went on trial and was found to have driven the lorry from Northern Ireland to the Docklands and was jailed in June 1998 for 25 years for conspiracy to cause explosions. After an article in The Sun newspaper led to the judge dismissing the murder charges, he was eventually convicted of also being a member of an IRA sniper team and sentenced to a further 50 years. He was released under the terms of the Good Friday peace agreement just two years later.

Today a memorial plaque at South Quay station of the Docklands Light Railway pays tribute to the two men who died that day and the area where the bomb exploded has been rebuilt, a testament to the hard work of the Londoners who rebuild from disaster just like they did in the wartime and just like they always will.

Posted by Disasters and Shipwrecks at 10:47 AM