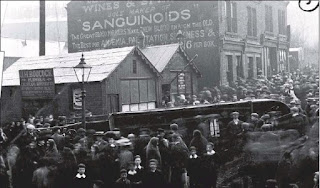 There are few areas in the world that suffer more than one headline hitting tragedy but the small town of Sowerby Bridge in West Yorkshire is one of these places. In 86 years two incidents occurred that would cost the lives of eleven people at almost the exact spot with the involvement of two different vehicles.

At 0550 on 15th October 1907 a tram was going by its normal route on the hill of Bolton Brow when the current suddenly cut out causing the vehicle to suddenly stop. With no electricity to keep the tram going it began moving backwards down the hill and due to the steep inclination it quickly gathered speed. With the curves in the road and the speed that it was going, there was no way it could take the bends and the tram flew off its tracks and smashed into the nearby shop fronts, sending debris and people in every direction. The tram came to rest on its side, the carnage waking the surrounding residents who rushed out to help.

Four people died at the scene and another died later, over two dozen were injured. One of those lost was the conductor who stuck to his post till the end and prevented passengers leaping from the runaway tram and into a certain death.

On 25th October an inquest returned a verdict of accidental death on the victims and the town, over time, got back to normal. Never thinking that there would be a second disaster years later.

Fast forward to 6th September 1993 on the exact same road. A lorry owned by Fewston Transport of Skipton was making a journey through the town when suddenly the brakes failed and it started to speed down the hill out of control. 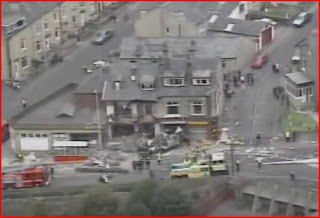 Within seconds the lorry careered out of the road and slammed into a British Telecom van and a row of shops, finally stopping with the cab embedded into the front of a newsagent/Post Office which moments ago had been crowded with children.

The driver and five others died in the disaster, when the lorry was examined it was found that the brakes were faulty and that the lorries had to travel through Sowerby Bridge for them to reach the M62. Residents had been calling for a by-pass for years without luck. 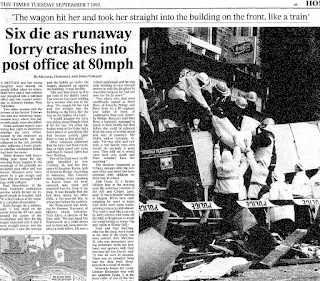 The owners of the truck were later fined £5000 by Halifax Magistrates, a small price to pay for so much devastation.

Today the area is back to being a road, a memorial garden to the victims of the truck crash stands at the site of a house that was destroyed.

With these two disasters, although over 80 years apart, shows that lightening can strike twice despite the lessons learned from the original incidents.

I would like to add both of these tragedies to a book on Britain's Forgotten Disasters to make sure that the people who died that day are always remembered. If anyone can help then email shipwreckdata@yahoo.co.uk and hopefully the 11 people who died in these two crashes can have their voices heard.

Posted by Disasters and Shipwrecks at 9:58 AM