Missing in the Night - The loss of the Flag Theofano 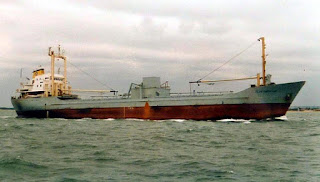 On 29th January 1990 a great storm had blown towards the coast of Hampshire and was causing havoc with the marine traffic coming in and out of the area. For those in charge of the waterways in Southampton and , trying to deal with the ships that needed a berth to unload their cargoes was a nightmare.

That evening the Greek cement carrier Flag Theofano was one of those ships, bound for Southampton after a short voyage from with 19 crew on board. At 2818 gross tons, the cargo ship was 324 feet long and was 20 years old, having been built in German and changing ownership several times, eventually her current name from 1989 and owned by the Golden Union Shipping Company of . Unable to provide the Flag Theofano with a berth that evening, she was called on the radio and told to go to anchor for the night at an area of the known as St Helens Roads. Agreeing to this change of plan they acknowledged it and headed to the anchorage. 44-year-old Captain John Pittas could now relax for the evening and worry about getting alongside tomorrow.

Dawn the next morning brought no better weather but the berthing arrangements had been put in place and the Flag Theofano was given the green light to weigh anchor and proceed into . But when she was called on the radio there was no reply. 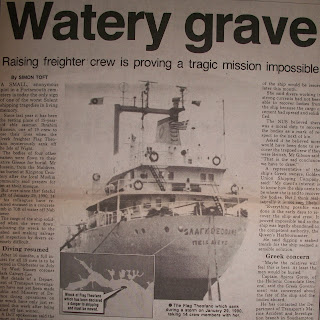 When vessels in the area were called and a search carried out, the ship had simply vanished. Had she already gone somewhere else? The search intensified and that morning the full horror was realised when two lifeboats, a life raft and two bodies were found nearby. It was now obvious – the Flag Theofano had gone down in the night and not a single person had known about it. There had been no radio calls and no eyewitnesses.

The wreck of the ship was located when an oily patch on the water along with bubbles was located along with something attached just below the surface to a rope. 20 meters below the surface, the ship with her cargo of 4000 tons of cement was upside down on the seabed and the first chance of a break in the weather allowed divers to inspect the wreck. 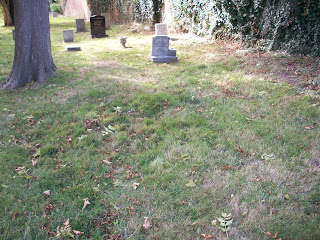 By now her cargo had come into contact with the water and hardened, leaving her now as a huge concrete block surrounded by the hull of the ship. There was never any sign of the missing 17 crew members and her loss was later thought to be capsizing due to bad weather possibly shifting the cargo.

The loss of this vessel and her crew of 19 is a forgotten disaster of modern day that is barely remembered. There are no memorials to the victims and one of the two bodies found is today buried in Portsmouth’s Kingston Cemetery with no gravestone to mark his passing (left). Ibrahim Hussain was just 19 years old when he became a victim of this shipwreck that is today barely talked about and with few who remember even the name.

Posted by Disasters and Shipwrecks at 6:37 PM