The Ship That Sank the Andrea Doria 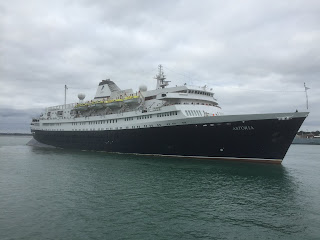 Many people will have sailed on board the liner when she soon retires from service, but only those with a love of her history will know what her story is and how she hit the headlines in 1956. With a white hull and single funnel, she is operated by the company Cruise and Maritime Voyages out of to destinations all around the world.

At over 16,000 gross tons and 525.1 feet long, she is in 2020 on her 72nd year of service making her oldest liner in the world still going. She is not a huge liner like the ones that are made famous by their size, but she can still hold 550 passengers and take them on a voyage of discovery.

Built in , , she was launched on 9th September 1946 as the for the Swedish-America Line transatlantic routes to . Although she was the largest ship built in she was actually the smallest liner on this route, but that didn’t stop her making trip after trip with success.

On 25th July 1956 she left and sailed into dense fog off . Sighting another ship on her radar she followed the correct procedures to pass the ship on her port side. But for some reason the mystery ship suddenly turned to port instead of to starboard, right into the path of the . At 2310 hours the bow of the ploughed into the side of what they now knew was another liner – the Italian vessel Andrea Doria inbound to from . 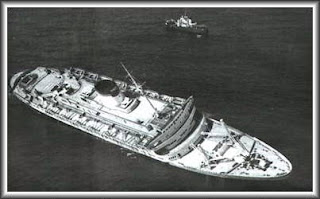 The side of the Andrea Doria was opened up and the ship began to list straight away, the bow of the ripped off. Incredibly the Stockholm was still afloat and began to rescue the hundreds of passengers now taking to the boats and being the only ship on scene at the moment managed to take on board 327 passengers and 245 crew from the Andrea Doria, including a young girl who had been scooped out of her bed on the Italian liner and was found in the wreckage of the bow of the Stockholm!

Over the next 11 hours the rescue operation went with success, over 1000 people rescued before the liner rolled over and sank. The death toll in this disaster was 46 including five people who had been killed on the . 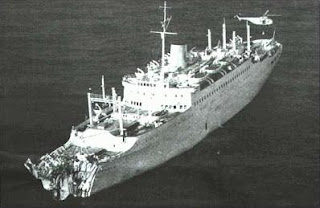 The ship limped into with the survivors and was repaired in around three months with a new bow section. It is here that the ship carried on her journeys until 1960 when she was sold to an East German company and renamed Völkerfreundschaft where she operated out of her new owners country until she was then laid up in , for several years.

Over the decades she was taken to to be used as barracks, going through a host of name changes as Volker, Fridtjof Nansen, Italia I, Italia Prima, Valtur Prima, Caribe, Athena, Azores (below with yellow funnel) and finally . She was completely rebuilt at in , the home port of the Andrea Doria – a fact that the local press quickly picked up on!

In 2008 as Athena she came under attack by pirates off the coast of but this was repelled by water cannon being fired by the crew and also a coastguard aircraft shooing them away. 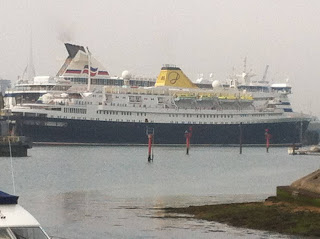 She was renamed Astoria in 2016 and sailed out of London Tilbury for several years before once again she made the headlines when it was revealed in June 2020 that due to the COVID-19 outbreak, some of the crew of Astoria (and several other liners owned by the same company) were being held on board without being flown back to their respective countries, some even claiming to be on hunger strike while at the same time not being paid. The Maritime Coastguard Agency prevented the ship from sailing while an inspection was carried out after concerns for the crews welfare was highlighted by the All Indian Seafarers Union.

As it stands the – ex – is still officially a fully functioning cruise ship, but for how long now nobody knows. 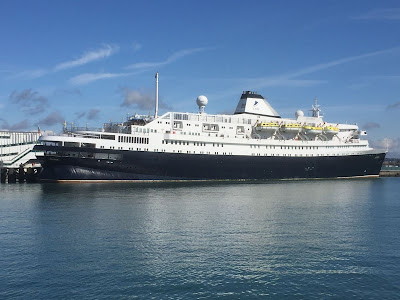 Posted by Disasters and Shipwrecks at 3:31 PM