Of all the liners in history there is one in particular that stands out as possibly the most beautiful ship ever built, at least that is the opinions of many who have come to know the SS Normandie. Owned by the French Line, she was launched in 1932 from her builders in St Nazaire in the middle of a global depression.

However, this world wide crash of the stock markets and general bad times for business did not stop the newest French liner from wowing the crowds with her maiden voyage on 29th May 1935. Incredibly she won the coveted Blue Riband award for the fasted crossing of the on her first voyage, breaking the westbound record on the return voyage. 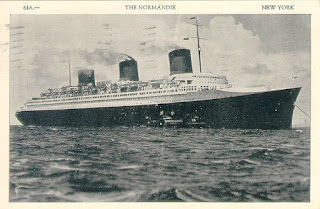 Already things were looking up for the pride of and her interiors told you why. With staterooms that were unmatched to any other ship, her passengers could dine in some of the finest restaurants in the world while completely forgetting they were at sea. The artwork adorning the vessel in the new Art Deco style that made the 1930s such a great decade for the memories of peacetime, but this was not to last.

As the Second World War darkened Europe with Nazi invasion, it was only a matter of time before was under occupation. When war was declared the ship was in and was immediately put under protection from then, her home country falling under Hitler’s rule by 1940.

During the two and a half years she was alongside in New York City’s Pier 88 there were many other liners joining her temporarily – one famous photograph shows Normandie with both Queen Mary and Queen Elizabeth side by side, a sight that the people of the Big Apple loved to see. 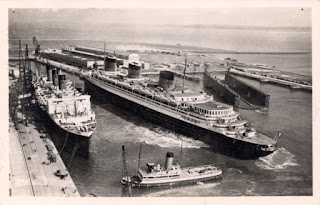 While the other two ships were hard at work transporting personnel across the Atlantic in the war effort, especially after joined the war in December 1941, the Normandie was being fitted out to be used for the same reason. The early months of 1942 were planned to get the liner up to scratch with a conversion from a luxury liner, a process that involved thousands of workers and so much effort to take apart the wooden panels, statues, staterooms and fancy artwork. She was officially renamed , yet she would never sail under this name.

On 9th February 1942 at 1430 hours, sparks from the hotwork being carried out in the First Class Lounge ignited a pile of lifejackets that had been stored there. A fire erupted and spread remarkably quickly due to all the flammable material that was in that area. Unfortunately for the Normandie, her fire and flooding equipment were all deactivated while the conversion work was going on. 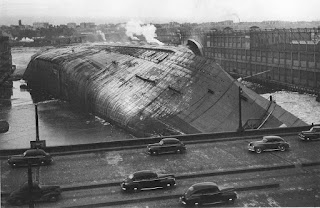 New York City Fire Department were on scene but the hose connectors on board were French and did not fit their hoses. Harbour fire tugs sprayed the ship but within an hour the ship was burning onto her upper decks, black smoke billowing out of the side of the vessel. Water was being pumped onto the ship to douse the flames but they were fighting a losing battle.

By the evening the fire was under control but the ship had taken on a list that was causing water to flood in through various openings, an attempt to counter balance the ship failed and as the night wore on the Normandie’s list increased. When all attempts to right the ship had failed, the order was given to abandon ship. During the fight to save her there had been several injuries amongst the workers and fire crews resulting in one death. 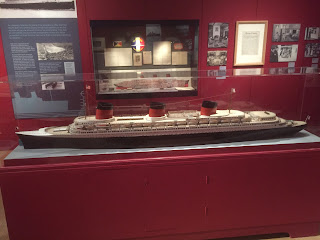 The ship finally went completely over in the early hours of 10th February and the morning light revealed the sad state of what was once the finest ship in . It would take 18 months to get the ship upright again, but by then the damage was done and she was eventually sold for scrap.

Today the legacy of the Normandie lives on in the memories and books that have told the story of her life, a huge model of her is on display aboard her running rival Queen Mary and she is probably more loved now than ever, her history as fascinating today as it was in the 1930s.

In 2017 a trip to New York City led me to Pier 88 to see the site where the career of the Normandie was ended so publicly. Today it is like nothing had ever gone on. No plaque or information board to tell the story of this ship and her glorious life. 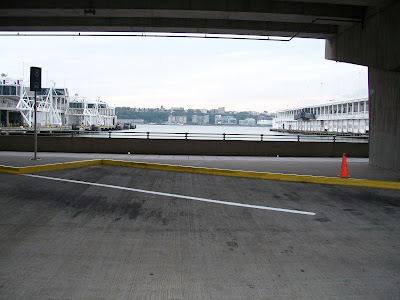 Posted by Disasters and Shipwrecks at 8:08 PM