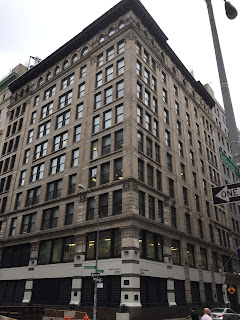 New York City at the turn of the century saw a revolution of factories and businesses that made the Big Apple the bustling city that it was growing to be and one that made immigrants from around to the world leave their homes and travel the thousands of miles for the promise of work.

One of these businesses was the Triangle Shirtwaist Factory on Washington Place and Greene Street housed in the top three floors of a ten-storey Asch Building. It was here that hundreds of girls made shirtwaists in what we would now consider terrible conditions. Treated like dirt, these girls were locked in on a daily basis to prevent them from leaving before the jobs were done and the thought of  any health and safety law were non-existent. 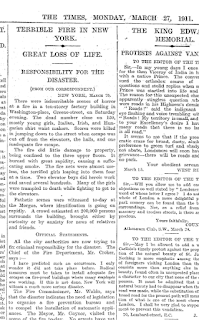 On 25th March 1911 a small fire broke out on the eighth floor which quickly spread amongst all the flammable materials around. The workers tried to call upstairs to raise the alarm but no sooner had they got word up the fire had already snaked up to the ninth floor and was heading for the tenth. With the locked doors and blocked fire escapes the workers had no way to escape from the flames and choking fumes from the thick black smoke that was overpowering them.

Faced with certain death, many of them chose to jump from the window and take their chances with surviving the fall down to the pavement below. Needless to say they didn't stand a chance.

As the fire brigade arrived to a raging inferno they were met with dozens of survivors that had managed to scramble free. This is where they realised that the ladders wouldn't go far enough to even reach floor eight let alone the tenth. 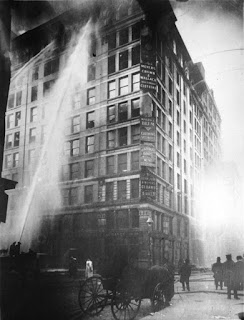 The scale of the disaster shocked the world, the death toll was eventually calculated as being 146, many of them trapped upstairs, the rest laying on the pavement below.

A scandal erupted as it was revealed the owners allowed the doors locked and went on trial for manslaughter - a trial that ended with their acquittal. They didn't learn from disaster - two years later one of the owners was fined for once again locking doors and keeping the workers inside.

The building today still stands and is today known as the Brown Building for academic research, a selection of plaques telling the story of the day the worst fire in New York pre 9/11 caused a change in labour laws that led to factories being a safer place to work.

I visited the site of this fire in 2017 and it was perhaps one of the quietest streets in the city. You could never imagine the horror of people jumping from buildings or the helplessness of the rescue teams being at this exact spot. It is only good now that these victims are now remembered in memorials, ceremonies and several books. Thanks to the hard work of historians, these people and their fight for justice will now always be remembered. 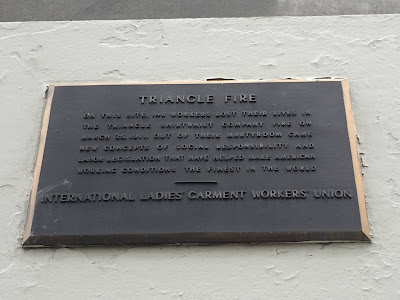 Posted by Disasters and Shipwrecks at 12:09 AM