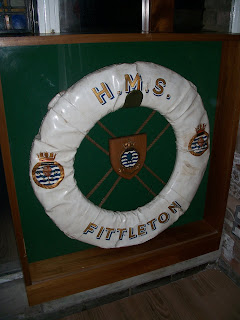 The importance of having mine countermeasure vessels in any navy has never been in doubt and in 1976 at the height of the cold war this was a time when, after only three decades since the Second World War, the dangers of these underwater menaces were still very much alive.

HMS Fittleton was one of these vessels. After launch in 1954 she was renamed HMS Curzon between 1960 and 1975 before she was re-branded with her old name. With a speed of around 15 knots, she was a wooden built Ton-Class sweeper of 152 feet in length and was destined to spend the bulk of her career under the Royal Naval Reserves.

On 20th September 1976 she was in the North Sea off Holland taking part in a large NATO exercise which would soon finish with the ship visiting the German port of Hamburg, but first she had to take part in a dangerous manoeuvre involving getting close to the frigate HMS Mermaid and transferring lines across from one ship to the other. This would then be used to send and receive mail, a risky task but one that ships do around the world. 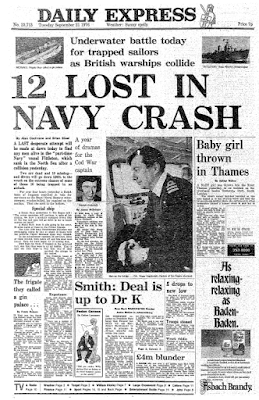 As the ships came in close the Mermaid’s sheer size compared with that of the Fittleton caught her off guard in an area of low pressure and the two vessels collided. The smaller ship suffered the most and rolled over completely.

The shocked task force mounted a huge rescue operation and thankfully located 32 survivors, the tragedy was that 12 others were not so lucky. The Fittleton wallowed around for several hours upside down before sinking to the bed of the .

It would only be one day later that the wreck of Fittleton was raised by a crane barge, the damage to the ship visible as it was hoisted out of the water. She was then made watertight and towed back to dockyard, . Five bodies were found, the other seven were missing.

A scandal erupted and the Royal Navy Police were called in to investigate when it was found that the sailors had just been paid in cash just before the collision, but only a few wet banknotes and a lot of empty wallets were found in the wreckage.

The wreck was examined and later towed off to be scrapped. The captain was court-martialled over the loss of his ship and found guilty of failing to reduce speed and putting his ship in danger.

HMS Mermaid was later sold to Malaysia and renamed Hang Tuah where today she is a museum ship after being decommissioned in 2018, a career lasting around five decades. 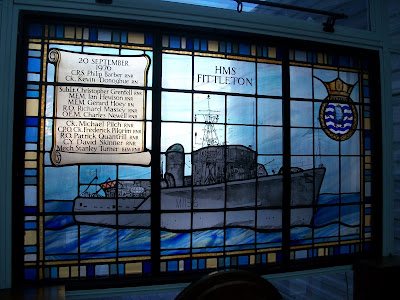 The sinking of the Fittleton was the Royal Naval Reserves worst disaster and there is a memorial window at the RNR base at HMS President in , a place that looks out over the Thames with a fantastic view of . Another window to the disaster is in the local church in the small in Wiltshire.

Despite the loss of several warships in the Falklands War in 1982, the Fittleton remains to this day the last warship to sink in peacetime in the Royal Navy, a trend that (despite a few mishaps over the years) they will hopefully continue to adhere to.


Posted by Disasters and Shipwrecks at 6:57 PM