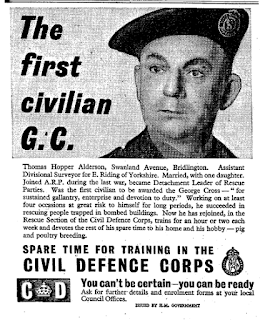 The word "hero" is thrown around a lot these days, but while the press continue to label celebrities and sports stars there are people in this world who do incredible things that put their own life on the line in order to save others. One of these people deserving of this title (although he'd probably much prefer it if you didn't) was a man called Thomas Hopper Alderson.

Born in County Durham in September 1903 he moved to the town of Bridlington in East Yorkshire, working for the Corporation as an engineer following his time in the Merchant Navy. Married with a young daughter, he enjoyed living here and never thought for one moment that fate would propel his name into the history books in this town.

When the Second World War broke out the first months were known as the Phoney War, nothing much happened especially on the home front, but as the first months of 1940 showed, things were to escalate fast when bombing raids first arrived on the towns and cities causing devastation and death wherever they went. The night times were filled with terror as the air raid sirens sounded their alarm telling everybody to seek shelter. In the big cities they found solace in the underground railways, subways and vaults, but in the smaller towns they had to make do with what they had. Basements, cellars and home made air raid shelters were the best they had. Thankfully though the raids on small towns were no where near as bad. 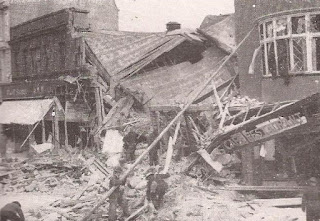 On 15th August 1940 on particular bombing raid saw several houses on St Albans Road in Bridlington completely obliterated. Thomas Alderson by now was an ARP warden and raced to the scene. Trapped inside one of the houses was a woman who was still alive. He managed to tunnel through the wreckage and reach her, slowly but surely dragging her to safety much to the delight of the other rescuers. 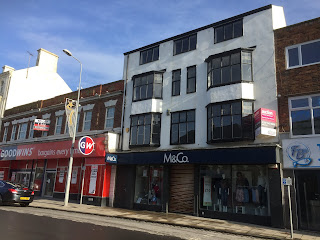 Just days later there was another air raid on Bridlington. As the bombs fell on the town centre one in particular demolished a set of five-  storey buildings on Prince Street, the wreckage of the building collapsing in on itself and trapping eleven people within the cellar.

Again without any consideration for the amount of danger he was putting himself in, he once again tunnelled through the wreckage and for over three hours worked hard until he had managed to get every one of the trapped people out. By the end of the escapade he was badly bruised, cut up and filthy.

While the rescuers in the town worked hard to dig out the bombed buildings around the rest of the town, the name Thomas Alderson was starting to be known around town. But he was not done yet.

Days after his major rescue he was involved in a third bombed out building where he rescued two people out of a cellar, one tragically dying later. For now he was done with the major rescues.

But behind closed doors his named had been spoken with great zest. There was a new medal about to be released in order to honour civilians who had shown extreme bravery in "circumstances of extreme danger." 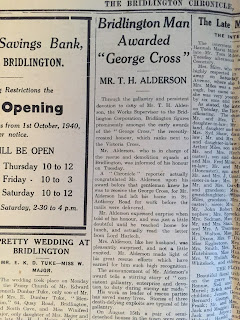 On 30th September 1940 the name of Thomas Alderson appeared in the London Gazette as the very first person to be awarded this medal. This was the civilian equivalent of the Victoria Cross, the kind of medal that a lot of occasions are posthumously awarded.

The importance of this medal was not lost on the town of Bridlington and he was celebrated in the town as the newspapers told of his exploits - a fantastic boost to morale during a period of dark times and gloom. But Alderson was always a humble man and never sought recognition for his wartime service.

Although he died of cancer in 1965, his name has lived on with a plaque that was placed next door to the rebuilt building in 1996 where he had performed his rescue of those 11 people and this being later removed and placed in a Royal British Legion Poppy Break Centre for veterans overlooking the south side seafront. Alderson House opened in 2007 but due to funding cuts was closed in early 2020. 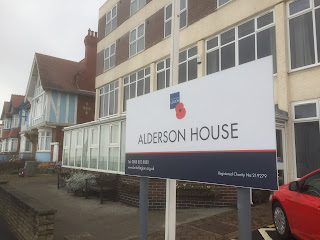 As it stands there is no plaque at the place where this heroic individual rescued almost a dozen people and we are in grave danger of forgetting this incredible man and everything he did for the town. I am now beginning to collect as much information as possible to tell the story of Thomas Alderson and show the world exactly what he did in the form of a book about his life.

Hopefully one day soon he will once again have a plaque at the shops on Prince Street - this time one that we can all see and admire.

(If anybody can help with the story of the Bridlington bombings and Thomas Alderson then email me at shipwreckdata@yahoo.co.uk with your information/photos and lets get this story told).

Posted by Disasters and Shipwrecks at 3:07 PM