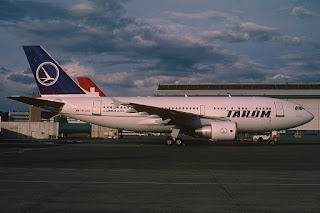 Sitting in my front room on 31st March 1995 watching the lunchtime news I was shocked at the breaking story that an Airbus A-310 had crashed soon after taking off from Bucharest in Romania. The airliner was owned by Tarom and all 60 people on board had been killed.

Designated as flight 371 the aircraft had began her journey at 0904 and began to climb as normal, but within minutes the plane was having problems. In the middle of a turn the auto-throttle seemed to fail and at the same time it is thought that the pilot became incapacitated for some unknown reason. 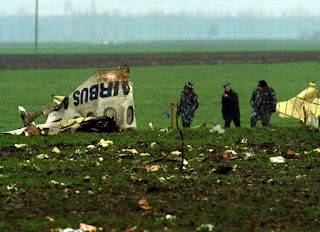 In an attempt to take control of the flight the co-pilot tried to re-establish some kind of order but to no avail. At 0908 the Airbus slammed into a field in Balotesti and killed all those on board.

First reports in the press and TV gave details of an explosion in mid-air but this was dismissed as most air disasters start with reports such as this. Investigators combed the field looking for clues and the two Black Box flight recorders were recovered and taken away to be examined. Rumours of a bomb bringing down the plane were soon proved to be false and the true cause was soon found.

Now a quarter of a century on the memories of that dreadful day are being remembered by the relatives and friends of the sixty who died. This still remains the deadliest plane crash in the country's history as well as the airlines.

Once the painstaking investigation was completed a permanent memorial was installed at the site of the crash listing the victims and giving those affected a place where they could remember their loved ones. In 2019 the story of this disaster was featured in the popular documentary series Air Crash Investigation (also known as Mayday in other countries) under the title Fatal Climb.

Unfortunately due to the current pandemic of Covid-19 it is very doubtful that this memorial will get any publicity today. Tarom is facing huge problems along with every other world airline with grounding planes and cancelling flights to help stop the spread.

But nothing can erase the personal reflection of this disaster for those affected by it and those left behind with their memories. 25 years for them will feel like yesterday. But for those who can, we will remember the victims of the crash of Tarom flight 371.

Posted by Disasters and Shipwrecks at 5:26 PM