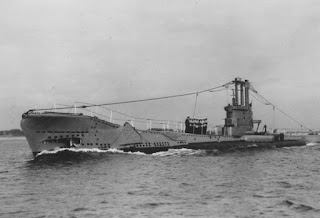 Few disasters at sea can sum up the worst imaginable death than that of a sinking submarine. To be trapped helpless beneath the waves as water floods in, knowing that the more seawater that comes in the heavier you get the further you sink. If you are lucky the sub will implode for an instant death (USS Scorpion and USS Thresher) but sometimes you are stuck on the seabed with only the darkness and cold like the Kursk disaster of 2000. The Amphion class submarine Affray was one of the latter.

Built in Birkenhead in the last year of the Second World War, the 281ft long Affray was commissioned in the November of 1945 and, together with her sister subs, they were said to be the product of the most modern submarine designs the Royal Navy had. Her journey with the British Pacific Fleet led to her going around the world taking part in multi-national exercises and some exciting port visits, but she was transferred to her new base port of Portsmouth in 1951 after she had previously been modified with a “snort mast” to allow the diesel generators to be run while submerged at periscope depth.

She set sail on 16 April 1951 for another exercise with a complement of 75 people, this included Special Boat Service marines and officers under training. A passing warship saluted her as they crossed and the submarine signalled that she was preparing to dive. That was the last time the Affray was heard from.

By the following morning the navy knew something was amiss when she failed to report in and so an immediate search was called for to track down the last known whereabouts of the sub. Two dozen ships scoured the sea and radio messages were blindly sent in the hope of a response, but all they got was silence. A listening device detected messages signalling that people were trapped on the seabed but the location was unknown.

It was two months before the wreck of the Affray was located, 17 miles from the island of Alderney in the Channel Islands. There were no survivors. 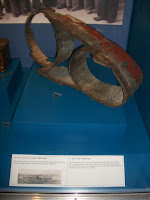 An exploration of the wreck located the snort mast which was said to be faulty but shouldn’t have failed to that degree. Many theories were put forward including trainee errors, battery explosion and the snort letting water in. The truth is nothing certain has been officially blamed for the loss. Items can be seen today in the Royal Navy Submarine Museum in Gosport  (right) as well as a display at the museum at the shore base HMS Sultan from this year.

In 2001 the wreck became officially protected as a controlled site and only diving can take place with Ministry of Defence permission to ensure the preservation of the wreck. 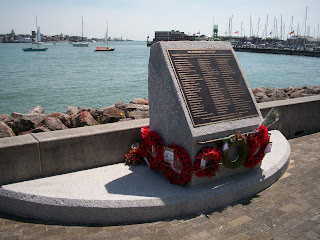 In April 2012 a plaque overlooking the sea on the island of Alderney was unveiled to commemorate the loss of the Affray and lists the names the 75 people who died that day, one year later an identical memorial was opened on the Gosport waterfront path. This ensures that one of Britain’s worst submarine disaster is never forgotten and that we will continue to remember the lost 75 crew, forever entombed in what is one of the largest submarine wrecks in the English Channel and the last Royal Navy submarine to sink and take lives.


Posted by Disasters and Shipwrecks at 5:26 PM