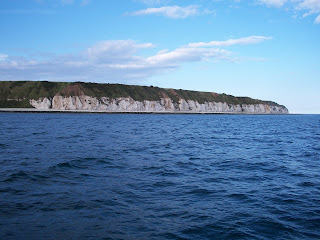 When I was a child I would find it fascinating that so many ships had been lost off the coast of my county, one book put an estimation that up to 50,000 ships had come to grief here over the centuries. When you think about it that is not too far fetched considering the storms that used to hit the coast and, according to records from the time, wrecked 300 ships here and 200 ships there. These soon add up when you throw in two world wars into the equation.

So this blog entry is on a few that I have come across over the years that the visitor to the Yorkshire coast can see without getting their feet wet. You certainly don’t have to be a diver to appreciate the maritime history of the ships that have ended their careers on the seabed. 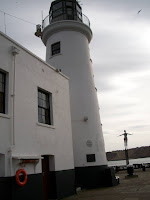 Scarborough lighthouse is one of these places. It was the opening months of the First World War, on 16th December 1914 that this structure was seriously damaged in the infamous attack by German warships during the shelling of Scarborough, Whitby and Hartlepool While the damage was repaired and the lighthouse returned to operations, today a plaque marks the event and the harbour area serves as a place of relaxation for holidaymakers who enjoy chips and ice cream in the sunshine while debating whether to go on a pleasure cruise around the coast. But if you walk just past the front of the lighthouse and head to the end of the pier you will notice a gun mounted permanently on a plinth (below). 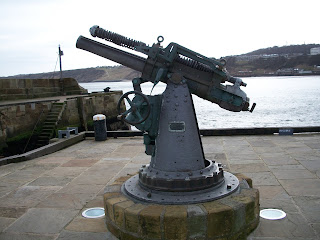 Pointing skyward and restored to its former shape without the rust, oil and salty deposits, this weapon was once on the cargo ship Hornsund, manned by the crew during the First World War against any enemy attacks during convoy duties. The ship was sunk by torpedo attack on 23rd September 1917 as the plaque on the gun explains. The wreck lay just over two miles from the harbour and as with many of the wrecks close to land it was found and explored by a host of divers throughout the years.

The gun was salvaged in 1982 and placed here by helicopter two years later. An identical situation (left)lies on the seafront at Whitby with the gun said to be salvaged from the wreck of the African Transport. On 25th June 1918 she was struck by a torpedo while in convoy to Gibraltar and sank two miles from shore killing three crew. What is interesting to note is that the gun from the African Transport still lies on the wreck site meaning this gun may have come from a completely different wreck nearby!

As with some of my previous blog entries, the gun from HMS Fairy was at one time mounted on the south side of Bridlington Harbour before being taken away and placed in storage. Rumours have suggested this may soon form a display elsewhere but as it stands nothing has been seen of it in 20 years. Other items from the German U-boats that have found their way in a permanent watery grave nearby as well as the wrecks of the Great Gale of 1871 and the Battle of Flamborough Head have all deserved their own story (do please check them out). 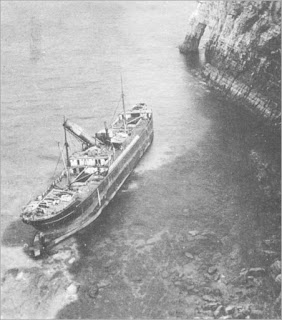 So now we will take a journey up to Bempton Cliffs. As you walk from the bird sanctuary and turn right at the cliff edge you come very soon to an area called Staple Nook. This is the site of three shipwrecks – the trawler Lord Ernle, trawler Skegness and cargo vessel Radium (right). The Skegness was particularly devastating due to the amount of crew lost but the other two grounded and were safely evacuated, all becoming dive sites and all now too broken up to see with the exception of the boiler from the Radium which only just shows the top at very low tide.

Another boiler can be seen if you were to walk in the opposite direction and follow the cliff edge to Speeton. After a long walk you can look over the edge at the small amount of stony beach below to see the remains of a boiler from one of the many cargo vessels that have grounded within the last century. Over 300ft down this is probably the best view you are going to get without endangering yourself or needing a boat (below). 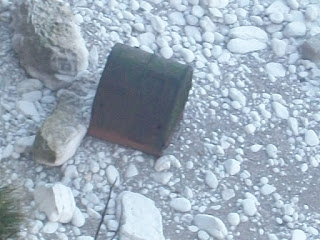 But if you want to see boilers close up then the place to head to is Reighton beach where the steamship Laura went aground 21 November 1897 and broke up where she lay (below). The two boilers are fully exposed at low tide and the visitor can easily walk around them and admire the pure size of these steel monsters. Other chunks of wreckage are exposed nearby and it would be amazing to see what else is buried underneath from what was once a fully functioning ship ploughing through the seas. At only seven years old when she came to grief it was just lucky that this is one shipwreck that didn’t take any lives in her demise. 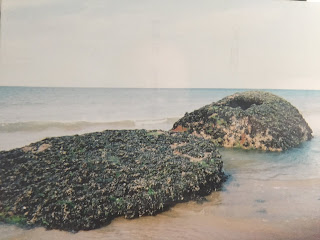 This is just a snapshot of some of the shipwrecks that litter the seabed off the coast of Yorkshire and as the seas become safer the newer wrecks become less and less, leaving the old ones to slowly fade away until not even divers visit them any more. The items that have been salvaged from these now adorn some of the local pubs and museums and it is great to see them cared for. If you are ever in these towns do seek out the guns pointing out to sea and the local museums telling the stories. One day these stories and artefacts will be all we have left of this time period at sea.

Posted by Disasters and Shipwrecks at 9:26 AM