The Memorials of 9/11 - A Personal Journey 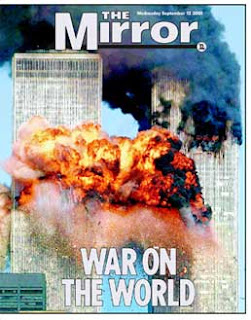 It is 18 years ago that the eyes of the world woke up to the news that the word "terrorism" had taken on a whole new meaning. The hijacking of four airliners by 19 terrorists and then using them to deliberately crash them into buildings was something that both shocked and horrified every person who had even an ounce of compassion. The two famous "twin towers" of the World Trade Center in New York City fell in clouds of dust within two hours, an entire side of the Pentagon collapsed in a heap and a fourth plane was taken over by it's passengers and crashed into a field in Pennsylvania before it had chance to conduct it's deadly mission - a sacrifice that immortalised the heroic players in that fight back.

11th September 2001 was without doubt a day that shocked the world and like everybody else it started off like any other day for me, sat out at sea on a ship in the middle of the Mediterranean enjoying the sun and looking forward to getting in to Turkey in two days time. That afternoon, after we had finished work, one of the lads came into the mess deck and announced that terrorists had flown planes into the twin towers and that the Pentagon had also been hit. This was surely too far fetched?

I raced up to the radio room and walked up to the man dealing with the messages. "How's it going?" I said casually. "Haven't you heard?" came his reply. It was then I knew that this was no joke as he turned the signal around for me to read. With the internet not at it's greatest ability we managed to upload the BBC News front page and as the first image popped up on the screen of the side of the tower erupting in a fireball, we all just looked shocked. All kinds of questions ran through our heads. Who would do something like this? How many people have been killed? What are going to be the repercussions?

As we pulled into Turkey two days later (with the newspapers here being a day late from the UK) I managed to see the first reports and there the news remained for months, it was all what came to be known as 9/11 and what turned into a war in Afghanistan lasting over a decade. 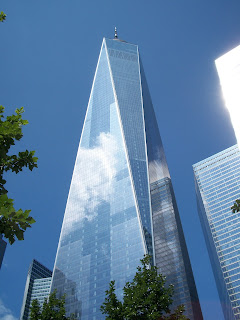 So as the dust settled and the years went by, I have decided to share with you all the numerous memorials that I have visited around the world that have commemorated the attacks and remembered the victims.

So I will start with New York itself. In August 2017 there was an opportunity to join my in-laws with their American road trips and with a stop over in the Big Apple I wanted to see for myself where these terrible events took place.

The first thing you see is the incredible structure that is the World Trade Center today, built right next to where the twin towers once stood as a show of defiance to any terrorist - we will not be beaten! Rising 1776 ft tall, the elevator ride alone takes your breath away with an animation of how the city was built from mere vegetation to the megalopolis that you see today. A counter with the years tick by in the top corner as you watch buildings rise from all corners, for a brief few seconds the two towers appear then disappear next to you before the doors open. The scene from up there is nothing short of breathtaking, the city spread out like a model village below. 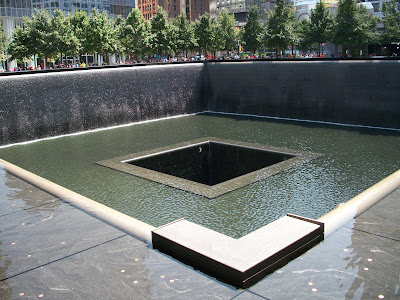 Leaving the WTC you are immediately drawn to the two massive waterfall pools, the original footprints of the towers. Around each of these adorn the names of all those who died in the attacks that day, a rose being inserted into the name of those whose birthday it is today. 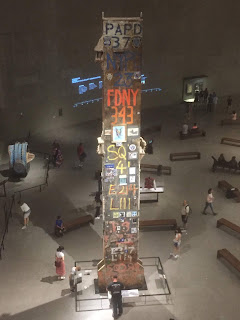 The museum in the underground section is both sombre and fascinating. The stories told in here speak volumes about the buildings, the attacks, the people and the lives lived within these buildings in the two decades that they were standing tall. Items on display range from gift shop souvenirs to pieces of the airliners that were used as missiles by the terrorists. A huge piece of the tower which served as a kind of centrepiece for the photographers during the clearup operations is adorned with the graffiti of numbers - the numbers of firefighters lost, police officers from different departments and civilians dead. The remains of a fire truck and the antenna at the top of the North Tower leaves you under no doubt that this huge event that shook the world happened not in some faraway country, but right here at this very spot.

New York has various other memorials to the attacks. At the USS Intrepid, a Vietnam-era aircraft carrier moored at pier 86 down the Hudson River a piece of WTC steed is shaped into a memorial. A plaque at Liberty Island under the famous statue has a Memorial Grove of trees, Battery Park held the famous sphere that once stood between the two buildings and a huge firefighters mural stretches down Greenwich Street and leads the way to more museums dedicated to the event. 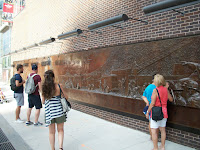 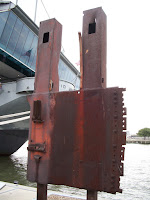 The 9/11 Tribute Museum was one that I visited which was just as fascinating as the others. Despite the event being the same, it's amazing just how different they can be. How many more different versions of events could be found? How many exhibits could you possibly get? Who knows. But each one is worth a visit in itself and for somebody who wants to know as much as possible about the events of that day then there is never a shortage of places to go for information. I didn't get chance to see loads more including an exhibition of photographs and various other plaques. The city is simply just too big to discover everything in such a short space of time.

St Pauls Church had a lucky escape when the towers fell, the plaque there today telling the visitor that on the first anniversary a bell was placed in the churchyard to be rung out every anniversary, a symbol of both remembrance and a lucky escape for the historic church. A small Greek Orthodox church closer to the towers was not so lucky and remains one of the smaller less known stories of the fall of the towers. 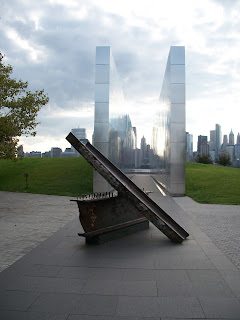 So we move away from New York and head over the water to New Jersey. Another monument originally to the Polish dead of Katyn Wood during the Second World War now has an image of an angel weeping at the burning towers. Both powerful and upsetting.

Up the road is the memorial known as the Empty Sky. You will find that in Liberty State Park, normally a place where you head off to get the ferry over to Liberty and Ellis Islands, but not far from the terminals is two walls, set apart by just a few feet and pointing directly to the site of where the towers once were. When we arrived there the sun was shining at the perfect angle and created what can only be described as a diamond ring illusion, with the silence of the park and the image before you, it is difficult to to feel emotional at this. Steel from the towers stands at the entrance with inscriptions of those who died running up the sides of the walls. 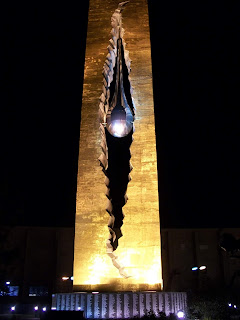 Also in New Jersey after a short drive away is what can only be described as one of the most beautiful monuments I have ever seen. The Teardrop, donated by Russia, stands 100ft tall overlooking the water towards the site of the towers with a 40ft teardrop hanging through the middle like an oddly shaped needle. The names of the dead run in a circle around the bottom of the monument. What impressed me is that they have included the six who died in the 1993 attack, when a truck bomb detonated in the car park in the first attempt to bring down the towers. 1000 people were also injured that day but the towers stood tall.

So the road trip continued over to Baltimore where a very unique memorial stood outside their city World Trade Center. As I was looking at the twisted steel that made up the monument a segway tour stopped where I overheard the guide tell the people that the memorial was inscribed with lines giving the dates and times of events. Apparently on 11th September the shadow of the building hits those lines at the exact times as the day goes on. If this is true then this is a remarkable feat of planning and engineering. Other stones close by simply say "Pentagon" and "Fight 93, Shanksville, PA." 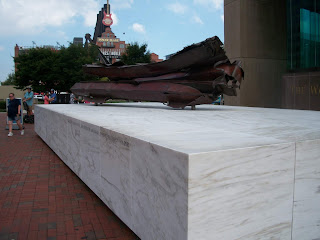 One thing I did notice is that the 9/11 attacks are not just monuments outside in the street, the stories in museums show their own artefacts, stories and personal effects. The Smithsonian museum and the Ronald Reagan Trade Centre in Washington DC both have steel from t
he towers, the trip taking us over to the small town of Gettysburg where you can still see how they remember the day, despite their own history as being the bloodiest battle of US soil during the Civil War. 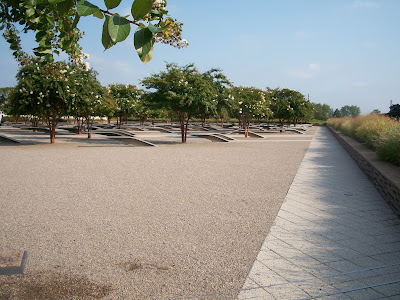 My final visit in the States took me to the Pentagon, the site of the crash of flight 77 which cost the lives of 184 more lives. The area where the building collapsed is now repaired and you would never guess that anything untoward had ever happened here. A memorial garden of trees with pools adorned with the names of those who died is set in a background of high security reminding you that the Pentagon is still a US Government building under top surveillance, so much so that you are told not to photograph the building if you are visiting this memorial garden. 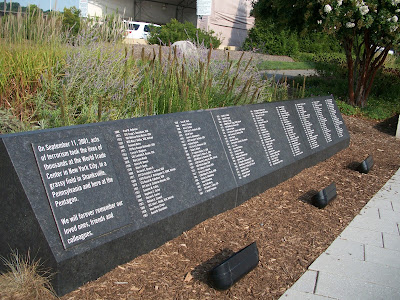 But it is not just the USA where you will find memorials to these attacks. 67 Britons died that day and so a memorial to them was built in Grosvenor Square in London. What looks like a temple complete with columns in a Greek style like a mini acropolis, the names of those lost from the UK in three bronze plaques (below right). 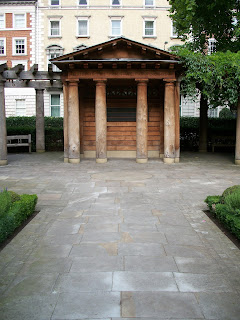 Gdynia in Poland has a small solidarity plaque near the seafront, today a demolition crew is tearing down an old leisure centre but thankfully the memorial is not being disturbed. This is one of those smaller plaques that you would literally miss it if you blinked. For this one you head towards the historic warship Blyzkawica straight ahead, this is on the left hand side as you walk towards it (below).

So these are the monuments I have visited myself which commemorate the September 11th attacks. I have no doubt that there will be many more over the coming years that I will manage to make that journey to and gaze upon the memorials to the citizens of other countries. There have been hundreds of terrorist attacks in just the last 20 years, the cities of London, Paris, Brussels and Berlin have joined the names that were splashed on the front pages. Memorials will continue to be erected to the dead in such shocking events and it is up to us as the good citizens of this world the help keep the memories of these people alive so they continue to be a part of our history. But most of all we remember the heroes of all four flights, the fire crews, the police, the unsung rescuers, the office workers and the people left behind to deal with the pain.


It is too big of an event to ever forget, but we will be assured that the names of the lives lost on that dreadful day 18 years ago will forever be remembered. 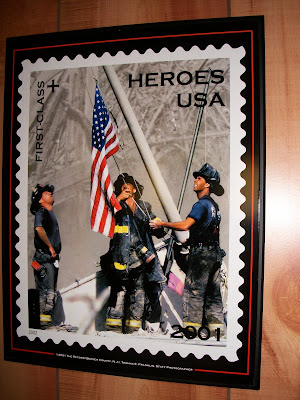 Posted by Disasters and Shipwrecks at 9:09 PM