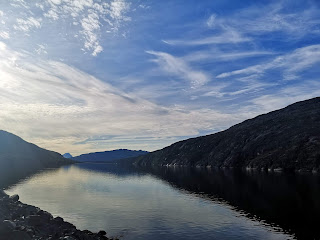 The small town of Narvik in Northern Norway is the centre point of the iron ore trade which branches out in all directions from the Arctic Circle down to Oslo and beyond. It was this trade that made the area a very important target for Nazi Germany and sure enough the expected invasion was soon to take place in early 1940 in order to secure this land.

The Royal Navy though was already a step ahead and a fleet of ships was already deployed to protect the area despite the growing presence of German warships in the seas around Narvik.

On 9th April 1940 the invasion took place which swiftly sent the two Norwegian warships Eidsvold and Norge to the bottom during a battle involving no fewer than ten German warships. The land was taken in no time at all and the British had to act fast in order to prevent the situation getting worse.

The following days saw ship after ship sunk in this small area of water, the fjords now littered with dozens of shipwrecks from all sides. Ironically the German warships were by now sat around stranded due to the lack of fuel, their tankers being able to get through to replenish the units. 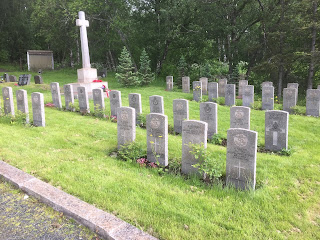 By the end of May 1940 the land had been retaken but unfortunately it was the smallest of victories as Norway fell less than a month later and the Allies withdrew from Narvik.

Today there are remnants of the Battle of Narvik all around the town and in July 2019 I had the opportunity to see them for myself.

To start with I visited one of the Commonwealth War Cemeteries which had dozens of graves from the loss of the British warships Hunter, Hardy and Acasta as well as a section of German graves on the other side of the cemetery. Just this one place really brings it home to you just how many individual sailors alone were killed on these ships. Each person buried here had friends, a family, a home and a story. Some just say "A Sailor of the Second World War" and may never now be identified. 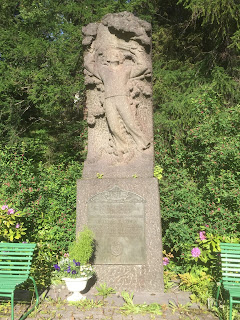 A memorial in the town centre honours those lost on the two Norwegian ships Eidsvold and Norge. These two put up an incredible fight against all odds and were the first casualties of a long battle. Today a peaceful memorial garden is dominated by a free standing stone marking the loss of these once proud ships. 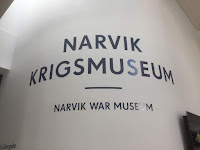 Nearby to the memorial is the Narvik War Museum, a building which is packed with information and relics from 1940 telling the story in several languages and giving an easy to understand view of the events leading up to the invasion as well as displaying some incredible artefacts from some of the wrecks of those ships which over the years have been located and dived upon. A light show over a map of the fjords shows the visitor what happened day by day and gives you a better realisation of the horrors of the war and the history of this tiny town. 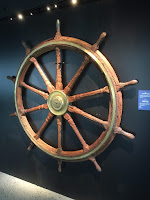 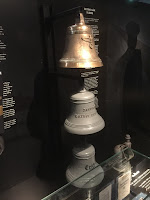 But the highlight of this trip was the visit to a site far away from the main town but one which was well worth doing. Taking a car across the bridge onto the main road and then back over the other side, down a country road surrounding by hills and trees and parking up where the road ends near a utilities station, we had to go the rest of the way on foot. Heading through foliage and mud, climbing over rocks and hanging onto tree branches, it was soon apparent that my shoes and jeans were suffering, not that I cared about this by now. For we had come to see the wreck of the German destroyer Georg Thiele, run aground deliberately during the campaign in order to save the crew from certain death after taking heavy damage. 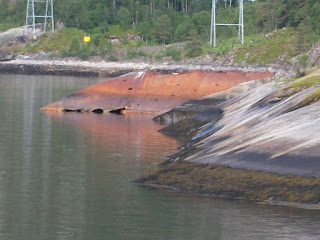 The wreck today is in the exact same location but is now upside down, brown with rust and her bow up on the rocks. The 390ft long ship is now mostly underwater and is a fascinating dive site, but the foc's'le remains above water for you to see, the damage to the underside now exposed, along with the various holes which expose parts of her machinery spaces. Bollards and anchor holes remind you that this was once a fine vessel of fighting capability with a proud crew and a shining personality. Today she is a piece of history that is there for all to see for those who can be willing to make the journey. A journey that is well worth it if you love history and want to see first hand this amazing relic. 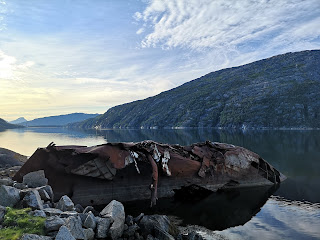 The Battle of Narvik is today remembered in the history books and has featured in only a few documentaries and it seems that it is still very much overshadowed by the bigger campaigns of the Second World War. The memories of what happened here together with the graves of all those who died during this campaign will forever lay quietly in a corner of those cemeteries or sit undisturbed underwater in the steel coffins that litter the waters of this tranquil slice of Arctic paradise. 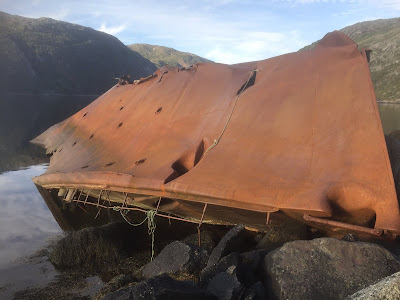 But thanks to the residents of this town and the historians who study this battlefield, the story of what happened here almost 80 years ago will never fade away.

Posted by Disasters and Shipwrecks at 7:54 PM