Sinking of the Estonia - 25 Years On

On 28th September 1994 a ferry disaster shocked Europe and led to a complete change in how roll-on roll-off (Ro-Ro)ferries operated. In the worst Scandinavian shipping disaster since the Second World War, the Estonia disaster still causes ripples a quarter of a century on. 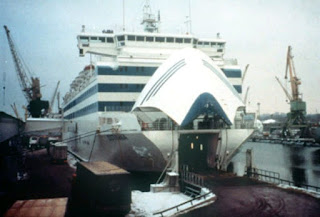 An inspection of this 515 foot long car ferry had taken place only the day before and given a clean bill of health. Her usual route was between Tallinn, Estonia and Stockholm, Sweden, carrying around 1000 people on each crossing which usually took overnight. The Ro-Ro ferry would have the vehicles enter through one end, lets say the stern doors, then they would exit when the ferry arrived at it's destination by heading forward and raising the entire bow to expose an inner door which acted as a ramp. The photograph left shows the Estonia with her bow door open. 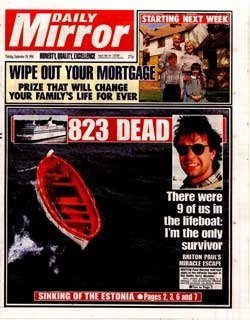 Estonia had been built at the Meyer Werft shipyard in Germany in 1980 and had been named Viking Sally (Viking Line), Silja Star (Silja Line), Wasa King (Wasa Line) before her current name when she was operated by Estline. She had made these journeys hundreds of times, ploughing through the Baltic Sea year after year proving to be a trustworthy and reliable vessel.

But on the early morning of 28th September something went dramatically wrong. The locking pins on the huge bow door simultaneously failed and the visor simply fell off into the stormy sea. The ship had been in rough weather all night and experts believe that the bouncing motion of the waves caused the pins to shear off with the constant battering of the bow.


With the door gone the water flooded into the car deck. As with the Herald of Free Enterprise 7 years previously, the Estonia only needed a small amount of water on the car deck for the ship to be dangerously unstable.

A mayday call was sent out and all ships in the area raced to her assistance. The evacuation of the ship began with the ship turning over onto her side very quickly....too quick to properly launch any of her safety equipment. Liferafts ended up upside down and the by the time the lights went out there was very little that could be done. 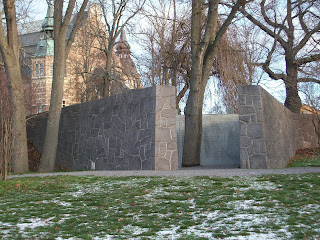 With hundreds of people in the water the Estonia turned completely over and sank to the bottom of the Baltic Sea. The nearby ships and helicopters rescued just 137 survivors. The official death toll was placed at 852.

Just days after the disaster the wreck had been located, the bow door missing but later recovered too far away from the ship to have drifted in the sinking. It had clearly been ripped off in the storm and was a crucial piece of evidence in the inquiry.

Today the Estonia is still one of Europes worst maritime disasters, only a migrant vessel in the Mediterranean in 2015 coming close to the same death toll. 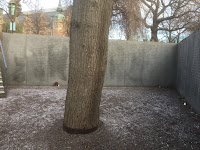 In 2018 I visited the memorial in Stockholm which stands at a cemetery behind the museum dedicated to another shipwreck, the Vasa, sunk in 1628. A curved wall lists the names of all those who died with various tributes across the bottom laid by relatives on the anniversary. (Photographs above and left). 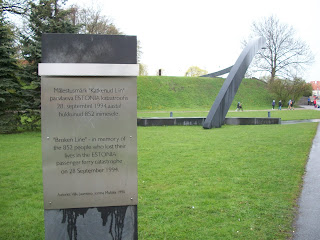 Her home port of Tallinn has a very unique looking monument to the victims. Again the names are listed but this is known as the Broken Line, a huge bar striking upwards and ending suddenly, the continuation of this being on the opposite side of the land up the hill that leads to the maritime museum. In all my years of memorial hunting I have never seen something like this before (Photographs right and below).

Needless to say the sinking of this ship is featured in the museums across both sides of the Baltic. A model sits in the Stockholm National Maritime Museum along with her sister ship Diana II. (Bottom photo) 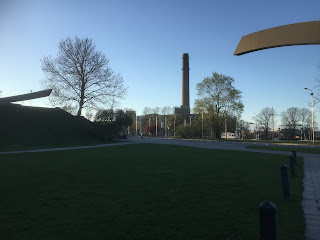 Although the Estonia is today one of the most shocking modern day shipping disasters, it will be a long time before this tragedy is forgotten. The staggering death toll and the shock of the suddenness that something this large could sink this quickly caught people unaware. In the aftermath of this many ferry operators had their fleet welded shut at the bow and only their stern doors used. As the years have gone by the bow door is still used but the safety checks will most likely be as rigorous as they can get.

Nobody wants to see another Estonia. While Europe has very strict shipping laws and safety rules, other countries are drastically lacking such features. Every few years a vessel founders in the same kind of circumstances - water on the car deck or lack of lifesaving equipment. Such is the tragedies of the ferries of Egypt, Philippines, Tanzania and Indonesia who will continue to cost hundreds - if not thousands - of lives. 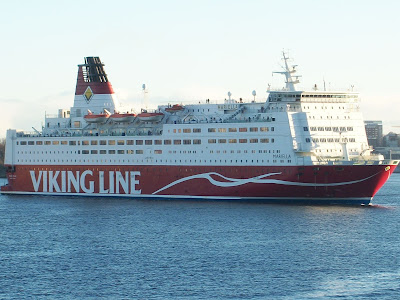 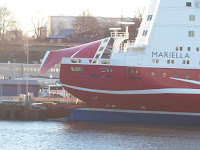 Estonia's running partner Mariella still works the same route 25 years on. Her door is the same visor style as seen in these photographs taken in late 2018. This vessel was one of the ships that raced to her aid and managed to rescue 15 survivors and served as a helicopter station where she took on board a further 11. 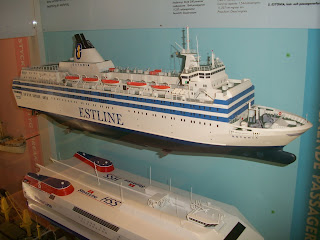 Today the wreck of the Estonia lies on her side at the bottom of the cold waters of the Baltic. The initial calls to raise the vessel have now vanished and she sits silently in her final resting place. A permanent memorial to her own demise.

On this anniversary there will be flowers, wreaths and ceremonies to commemorate this avoidable tragedy. Before long all that will be left will be the names etched forever on the walls of the monuments in these two Baltic ports, a reminder of our tragic maritime past.
Posted by Disasters and Shipwrecks at 9:57 PM