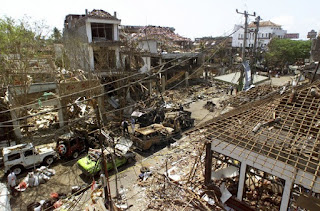 Bali is a popular holiday destination island in Indonesia which sees millions of foreign visitors arrive every year and soak up the culture, history and night life of this paradise island. But for the group calling themselves Jemaah Islamiyah this was somewhere that represented everything they hated. With the country's support for Australia in the liberation of East Timor and the continued support for the USA's war on terrorism, the tourists of Bali now became a target.

Late in the night of 12th October 2002 a small device exploded outside the US Consulate causing minor injury to one person and raising a security alert. This caused very little damage but soon after came a much larger attack. 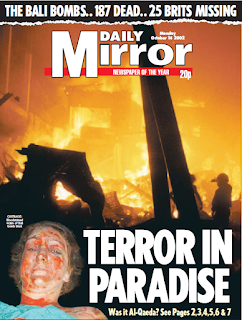 Soon after 2300 aman walked into Paddys Pub wearing a rucksack and calmly detonated a bomb causing deaths and panic within seconds. Hundreds of people ran out of the club into the street where just seconds later a small van loaded with explosives exploded outside another venue, the Sari Club.

The devastation by these two explosions left dozens of dead tourists scattered in all directions, hundreds of injured staggering around while people rushed from all around to help where they could. A crater a meter deep showed the centre of the blast and the shockwave caused damage several streets away.

A rescue operation was swung into action but they had never had to deal with anything this big before, the hospital was overwhelmed and temporary first aid posts had to be set up in hotels. The death toll was staggering - 202 dead plus two suicide bombers, another 200+ injured.

An  investigation managed to pinpoint the group involved and members were arrested, put on trial and executed. 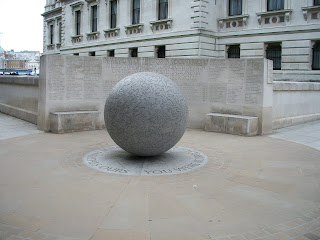 The site of the bombing was cleared within days and Paddys Reloaded was opened a short distance away from the original, a sign that no matter what, life goes on and they will not be blown up and feel fear. A memorial was put up on the site of the blast.

Another memorial to the Bali Bombing was built in London near St James' Park featuring a wall of names in front of a globe with 202 doves engraved into it.

But within three years Bali had hit the headlines again when suicide bombers again targeted three locations killing 20 people and injuring over 100. Although they proved that they could hit the tourists again, the tourists proved once again that they were not afraid and they would keep coming back to the place they loved. Proof once again that terrorism does not win.

Posted by Disasters and Shipwrecks at 8:21 AM