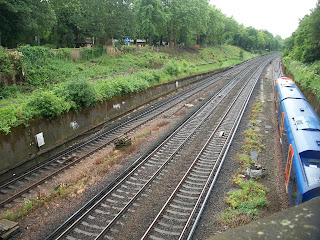 The run up to Christmas 1988 was going to be as busy as ever, especially for London which is already crammed as ever with shoppers and workers alike. In the early morning of 12th December a faulty wiring issue on the railway signals at Clapham Junction, the busiest station in the city, caused a signal to be displayed incorrectly in the run up to the station.

The 0718 Basingstoke to Waterloo train had made the journey without incident until now when all of a sudden the green light at Clapham changed to red before it had chance to even slow down. The driver stopped the train and used the phone to inform the signal box of what had happened. At 0810, while the train was waiting for the green light to go, a second passenger train suddenly came around the bend and slammed into the back of the first. The resulting crash left a heap of wreckage and devastation across the tracks, dozens of people were injured, several were dead, but the disaster was not over yet. 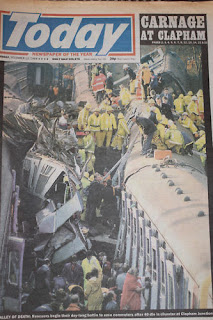 A third train, carrying no passengers, smashed into the wreckage causing even more carnage. A fourth train saw what happened and was able to stop in time before he too would collide with them. By now the wreckage was already strewn over the multiple tracks and one of the busiest lines was now out of action.

Rescue services were called and were met with a massive task of trying to get down to the wreckage of the three trains from an embankment above. A local school was right next to the crash site and helped with the rescue of survivors. The operation to recover the wounded took until the early afternoon as the injured people ran into the hundreds. Bodies were retrieved from the wreckage and had to be hauled up the embankment to waiting vehicles to be taken away. 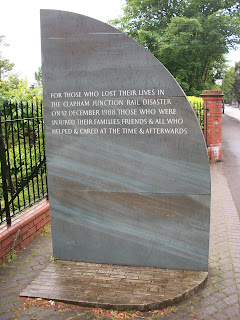 The final toll was 35 dead and almost 500 injured. An investigation was carried out and found that an engineer had conducted a wiring job without supervision, checks and tests leading to the signal failing to show a red light when a train occupied that section of track. This wasn't the only headline hitting disaster for Britain, for just 9 days later the Scottish town of Lockerbie was host to the country's worst air disaster. The Christmas of 1988 was tinged with sadness on both ends of the country.

Today a memorial stands on Spencer Park overlooking the spot where the disaster happened. Every year survivors and relatives gather to pay their respects to the day that brought Clapham Junction to a halt and ended the lives of so many people.
Posted by Disasters and Shipwrecks at 2:13 AM