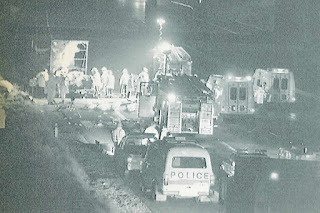 The night of 17th November 1993 was one that excited the children of Hagley Roman Catholic High School as they attended a school trip over to the Royal Albert Hall in London where they had spent the evening enjoying a concert of young musicians.

When it was time to make the journey back to Hagley, near Birmingham, it was destined to be a long and tiring drive and many of the 14 children would sleep on the way while their teacher Eleanor Fry would drive them, while a second minibus carrying another group from the same school followed behind. 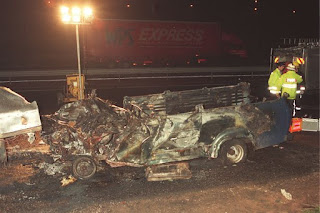 Just after midnight the bus was travelling down the M40 motorway near junction 15 when suddenly the vehicle, travelling over the speed limit, struck a motorway maintenance truck parked up on the hard shoulder and exploded.

The resulting fire completely destroyed the bus and damaged the truck, cars screeched to a halt and ran out to help rescue those trapped in the wreckage. Out of the 14 children and one teacher on board, only two of the children survived. The occupants of the maintenance truck escaped with minor injuries. 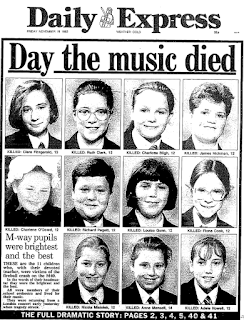 An investigation showed that the driver most likely fell asleep at the wheel just before the crash and at the time it was not laid down by law to have seat belts fitted within minibus passenger seats. This all changed after this disaster, one that is still commemorated at the school where the victims came from, a stained glass window and a memorial garden commemorating the 13 victims of one of Britain's saddest road accidents.

What made it worse was the backlash against the media who used photographs of two grieving girls on their front pages as well as the BBC News pushing the story to be broadcast further into their bulletin rather than the top headline it so deserved.

A campaign called Belt Up School Kids (BUSK) was launched in order to change the laws on seat belts on school buses and this was successful following another mother who had also seen her son injured just months before the Hagley crash leading the campaign.

This disaster is one that shocked the country and one that I would like to highlight in a book on Britain's Forgotten Disasters at some point in the near future. If you can help with the story in any way then please contact me shipwreckdata@yahoo.co.uk to tell your story. Inicidents like this should not be confined to a few news articles online, with 27 years passing this November, the memories of these victims should be forever held close to us.


Posted by Disasters and Shipwrecks at 8:57 AM