On 24th May 1995 Britain was shocked by the front pages of the newspapers announcing the death of 10 people in a coach crash on the M4 motorway the day before, a disaster that eventually would see three more people die over the coming days. But in less than 24 hours there would be a second transportation disaster, only this time there would be an element of mystery surrounding the cause.

Knight Air flight 816 was a twin-engined Brazilian made Embraer Bandeirante which was one of six aircraft for the airline which was now running commuter flights from Leeds-Bradford Airport to Aberdeen, Isle of Man, Southampton, Teesside and Belfast. Flying the aircraft was Captain John Casson and his co-pilot John Denton who together had a vast amount of flying experience. 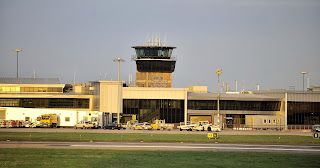 With one stewardess on board, the plane carried a total of nine passengers on an evening trip to Aberdeen that was about to head into bad weather, but this wasn't much of a concern as the pilots had flown through this dozens of times before. The plane taxied to the runway and was given clearance for take off at 1746, heading towards Scotland with an expected arrival time of 1835. This aircraft had completed this journey several times a day and it was a safe and reliable plane with a competent crew. The passengers sat back and relaxed as the Embraer increased speed and took off from the end of the runway.

But just three minutes into the flight the pilot radioed the airport requesting permission to return to the airport. At 1750 the aircraft was in complete silence as it disappeared from RADAR. The controllers now had cause for concern.

The fog that seemed to envelope the whole of Yorkshire was not one that caused a great concern, but when the emergency services got a call just before 1800 that a possible light aircraft had crashed into a field in the tiny village of Dunkeswick in North Yorkshire, ambulances with police and fire teams rushed to the scene. When they reached the field, a mess of twisted wreckage gave them all the information they needed.

Firstly this was not just a light aircraft, secondly there were no survivors of the 12 people on board. The roads were closed off as teams from the Air Accidents Investigation Branch began their examination of the wreckage and had it taken away piece by piece.

The news crews turned up and broadcast live from the scene of the disaster and also carried an interview with a young boy who claimed to have heard over his radio the last words from the aircraft, saying that they had been struck by lightning before it went dead. 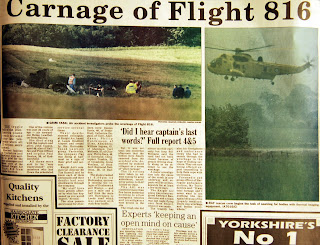 Upon studying the broken pieces of the flight, investigators found that there was reason to believe that there were problems with the artificial horizon. There were two of them on board for flying in reduced visibility, the only problem was that if one of them were to give a false reading in a failure, that left you with two horizons both saying different readings. At this point which horizon do you trust? The resulting struggle to fly the aircraft sent it into a spiral into the field eight miles away from the airport.

The final report blamed the failure of the horizon and suggested that all aircraft install a total of three artificial horizons in the event of one giving a false reading, the other two would read the same correct level.

25 years on this disaster is pretty much forgotten, there are people who live close to the crash site today that don't even know that the nearby field has a grim history.

Knight Air ceased trading less than a year later, the bosses claiming that the crash had not influenced their decision. An inquest was held in November 1996 with the jury returning a verdict of accidental death on the twelve victims. 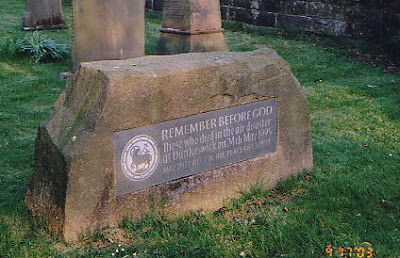 Today there is nothing to suggest anything untoward happened in the field in Dunkeswick that was the site of so much grief. But the nearby village of Weeton has the Church of St Barnabas there is a memorial stone dedicated to those who lost their lives in the crash of Knight Air flight 816.


Note - I am writing a book on British disasters that have been forgotten over the years and plan to include a chapter on Knight Air 816. If you know or have anything relating to this crash then please contact me shipwreckdata@yahoo.co.uk

Posted by Disasters and Shipwrecks at 2:03 AM