The Crash of Airship R-38

The new airship design known as the A-Class was designed during the First World War for use as long range surveillance and the plan was for four of these to be built to be used by the Royal Navy but the end of conflict saw the one half-built airship sold to the United States Navy and the other three cancelled before they could be started. 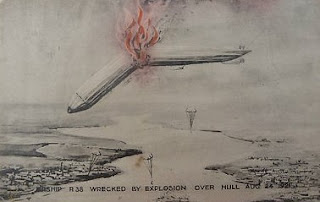 R-38 was completed and trialled in 1921 and was an success to its owners and operators. At 695 feet long she was designed to operate with just 30 people, with the ability to fly at a maximum speed of 70mph. The Americans renumbered her ZR-2 and technically she now flew with two names.


Further trials and tests were carried out and it's fourth journey on 23rd August 1921 was to an air station in Norfolk where she spent the night. The next day the ship made its return journey back to Howden in East Yorkshire with 49 personnel on board, 17 of them Americans. 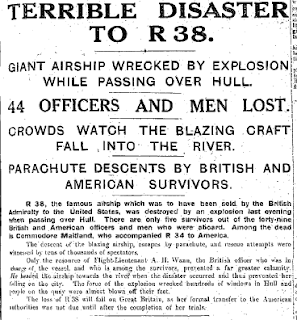 That late afternoon as thousands were looking up at the airship over the River Humber when suddenly the aft end of the craft started folding up and a huge explosion shook homes for miles around. The flaming wreckage plummeted into the river with a huge crash.

Only four people were pulled alive from the wreckage as boats scoured the area for bodies. The tragedy hit the headlines and was the first major airship disaster which would soon be overshadowed by the R101 and Hindenburg over the next 16 years.

The investigations showed that the design didn't take into account certain stresses that the structure would have to contend with during its manoeuvres and flights.

A memorial to the disaster is today in Western Cemetery in Hull to those who died. 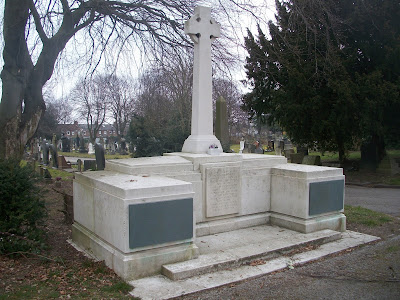 Posted by Disasters and Shipwrecks at 9:10 AM