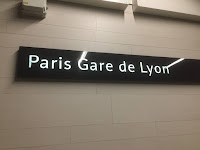 Any crash on an underground railway would be a nightmare, even if you don't take into account the deaths and injuries. The struggle to get people back up to street level, the heat caused by the lack of ventilation and the confined space where twisted wreckage cannot simply be craned out like it could if it was out in the open, nor could you airlift equipment and personnel. All this was found out in the 1975 Moorgate disaster in London when 43 died. 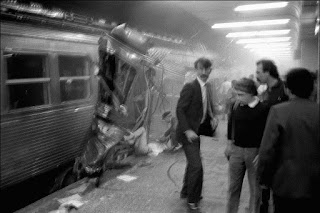 In 1988 the underground Metro system of the French capital Paris was on alert after a spate of bomb attacks around France earlier that year. On 27 June the busy station Gare de Lyon was slowly getting out of the rush hour traffic as the afternoon turned into evening. At the terminal platform 2B stood a train that had completed its journey and was about to begin a new journey in the opposite direction.

What the passengers didn't know was that up the line was an SNCF train inbound and very soon found that it's breaks were not working correctly. An alarm was activated which alerted the stationary train but nobody knew where the alarm was coming from as the driver failed to identify himself. 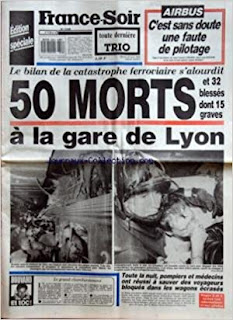 The time was 1909. The train sped into the station and slammed into the waiting train as passengers were being evacuated. The resulting carnage led to dozens of people being trapped in twisted wreckage.

A huge rescue operation was launched with fire crews having to search for people buried within the two trains which were now crushed into each other as one unit. Even hours after the impact the firefighters were still struggling to reach those within the mangled carriages. Bodies were being recovered one by one and it was not looking good for the people still within there.

Rescue workers lined the survivors up and administered first aid on the platforms before being taken up to street level to the fleet of ambulances waiting to ferry them to the hospitals, tarpaulins being placed over the ones that did not survive. 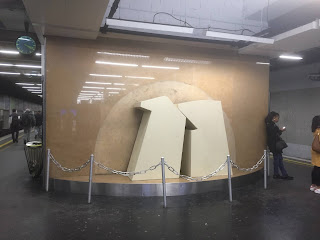 In the end there were around 60 injured and another 56 dead. This was the third worst rail crash in French history, one that the driver and guard of the inbound train was jailed for six months for manslaughter due to his actions with altering the brakes following a passenger pulling the emergency cord earlier in the journey.

A huge memorial naming all the victims is now on the platform and in April 2018 I took the opportunity to visit this monument to see for myself where this disaster had taken place. As with any major disaster site that continues working, you never can picture just what happened there no matter how many times you read about it.

Posted by Disasters and Shipwrecks at 5:27 PM